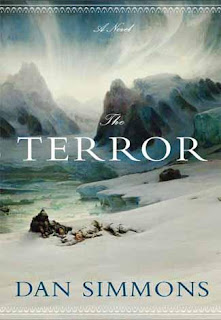 Dan Simmons, in his novel The Terror has written an interesting account of Sir John Franklin's last voyage, the one where he and his two ships the Erebus and Terror and all the crew vanished into the arctic ice back in 1845. I say interesting because he does an admirable job of arranging the few known, but often confusing, facts into a somewhat logical story sequence. Much of what he writes could have been the way it actually happened.

At the same time, Simmon's use of the fantastical and mystical, his bear 'monster' and the interplay of Inuit mythical stories takes much away from the account. It makes for a good story, but one that most Franklin fans will toss out after reading. For myself, I'd read it again for the assemblage of facts, skipping over the rest. As I bought the 'electronic' paperless version of the book, I might just do a little re-writing of my own!
Posted by Michael at 10:27 PM