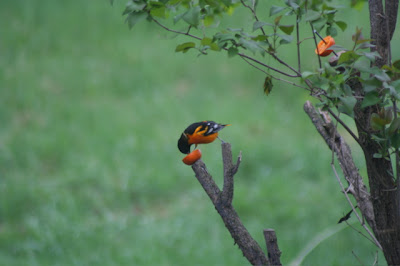 For years we've caught fleeting glimpses of the colourful Baltimore Oriole around our place, but we've never seen one long enough to be captured one on film. They would often nest in the copse across the road, but again we only knew that by finding their nests in the late fall when they'd long since left. They seemed impossible to find in the foliage at other times of the year. That all changed today.

I mentioned at dinner last night that I had caught yet another glimpse of this elusive bird.This morning after walking the dog, my wife cut an orange in half and nailed each half to some liliac branches I had trimmed last fall. Within a few minutes we had success. The picture tells the tale. What a beautiful bird!
Posted by Michael at 10:03 PM