Paddling in the Rain 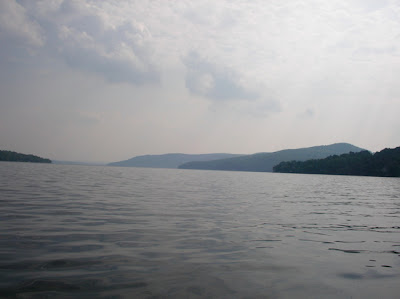 I went kayaking today in the rain. Yesterday was sunny and breezy and would have been a better day to be out on the water, but I had other obligations. Anyway, the lake was probably full of motor boats and so on, just the sort of thing I like to avoid.

As I was getting the boat in the water and setting up my video equipment, a canoe and kayak passed me and called out, "Are you the 'web-kayaker'?" At first, I wasn't sure what they meant, but after we spoke for a bit, it was clear they'd visited this blog, but had no idea who I actually was. We chatted for a while and then paddled off on our separate ways. It gave me an odd feeling, being recognized like that! I suppose some people get that all the time, but it was a new experience for me. Interesting.

I was anxious to try out a new camera set-up I'd made for filming my little videos. After paddling around for about an hour, I returned back to boathouse for a look. Everything was upside down! I headed out again with the lens properly orientated and tried again. This time, the camera must have stopped filming early as I captured only a few moments of video, mostly getting the camera set-up on the deck, and so on. Not really vintage footage! I'll have another go next time I'm out. I'm anxious to improve the quality of these little films so they're worth seeing. I'm getting closer, but still have a ways to go before I'm happy with the results.

Update! Since posting the picture above and given some of the goings on in the small world of kayak blogging, it's interesting to look again at the picture. Clearly it suggests to us that there's 'My Point' of view, 'Your Point' of view, the 'Observers Point' of view and finally 'What's-the-Point'. Four points, four opinions. Time to move on, I think. It's rained long enough.
Posted by Michael at 5:36 PM

Nice view.......
Nice post, its a really cool blog that you have here, keep up the good work, will be back. Here's my little site I'm gonna blog about Vehicles

I have a function in my photo viewing program that re-orientates movies taken the wrong way round, it certainly does sideways on ones, not tried it for upside down.