All Good Things Eventually Come to an End 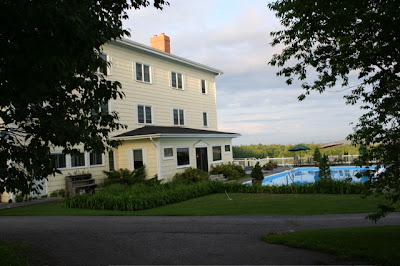 My paddling trip to Newfoundland has come to an end. I arrived home yesterday with some wonderful memories of experiences which I'll share over the next little while. Our planet is filled with interesting places to kayak, but few are as varied, challenging and heart-warming as Newfoundland. It is truly a remarkable place.

I stopped in St Andrews as I returned along the Fundy shore and stayed at the Rossmount Inn. This inn looks old, but is actually less than a century old. The original house had burned to the ground in the 1960's. The present building was built to replace it, using the same foundations and fireplaces. Many of the furnishings and interior woodwork was re-cycled from an 19th century hotel which was being torn down in St John, a city further up the Bay of Fundy. The dining room is the real treasure, where the food is locally grown either at the Inn's own gardens or from down the road at a nearby organic farm. 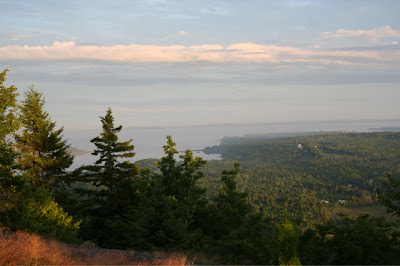 Behind the Inn an old carriage way was built years ago, leading up the hill to the top. The road was built by the original owners so they could take their friends on picnics at the smooth granite rocks at the top, where a 360° view of Passamaquoddy Bay and it's superb kayaking can be seen.

But this was my last stop. In future posts, I'll retrace my steps, looking at some of the places I paddled, hiked or experienced in some way.
Posted by Michael at 11:30 AM

nice to be home safely, with lots of good memories to treasure.

Look forward to reading all about, Michael. Thank you.