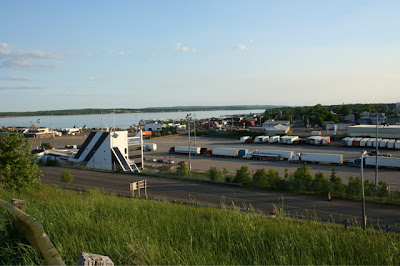 Traveling to Newfoundland by car means taking one of the ferrys which leave from Cape Breton, Nova Scotia. One service goes to Port aux Basques on the southwest coast, the other heads eastward to Argentia on the Avalon further east. I chose the shorter of the two passages to Port aux Basques - about 6 hours. The above picture was taken of the dock area in North Sydney, Nova Scotia. Cars and trucks are starting to line up. In a few hours they'll be onboard, heading across the Cabot Strait. 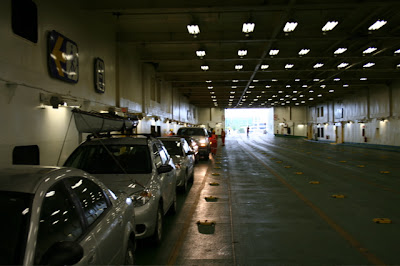 The interior of the ferry is huge. I'm not sure of the number of vehicles it can carry, but certainly one can see anything from motor-cyles to tractor trailors and everything in between. 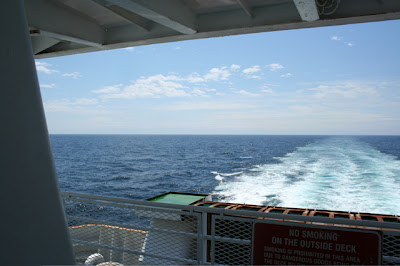 From the passenger deck, one gets a good view of the seas in the Strait. Here the wakes disappears astern. It is interesting to think that more than one kayaker has made the crossing successfully. Usually their route has been via a small rocky islet in mid channel where the crossing can be broken into separate legs. To say this kind of paddling is only for the very brave and highly skilled is an under-statement!
Posted by Michael at 6:14 PM

glad you're home safely and had a good adventure!

Thanks for keeping us posted, Michael - green with envy! Keep exploring for me, please...

Claire - guess what? I'm not home, not even close! The paddling here in Newfoundland is just too good to pass up. My biggest fear is being frozen in come Fall! LOL

GREEN WITH ENVY.
indeed
I did get out on Monday with the club, nice paddle. but I dither between
'today I'll' horses/kayak. . .
if I didn't have to work there'd maybe be enough time, maybe. . .