Setting off on this paddling trip, I purposely didn't make many fixed destinations. I just loaded up the car and headed eastwards with the plan to eventually end up in Newfoundland. The first day of driving took me into the state of Maine in the northeastern corner of the United States. This area is home to many seakayakers and interesting paddling spots, but I didn't stop. I crossed back into Canada near St Andrews and the Bay of Fundy. Then I stopped. 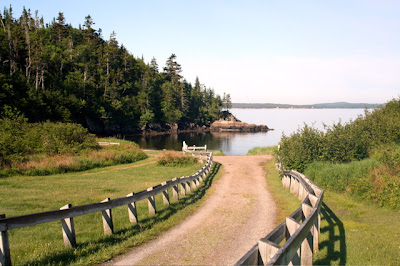 New Brunswick's Bay of Fundy coastline has some great paddling spots. On my recent trip along this coast, I began at the Maine border. As soon as you get to St Andrews, the wealth of inlets and tree covered, rocky islands begins. One could literally spend weeks exploring them all the while staying in inns and B&B's which line the shore.

The path leading to a typical put-in in the picture above is a bit further eastward along the coast at a small Provincial Park at New River. There is great parking and a protected cove to launch from. If the weather is not suitable for paddling, walking trails lace the point which juts out into the Bay of Fundy. Along the way, you'll come across an old homesite where a family tried to make a go of it fishing and farming for a living. Like many of these sites, it offered a marginal living mixed with considerable isolation, yet for many it was a toe-hold on a new start in a new land. 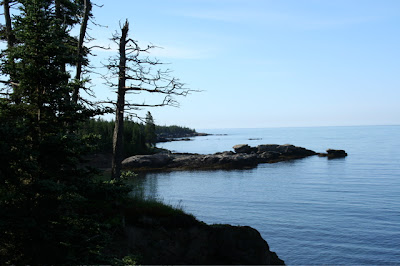 The picture above shows the coastline as the point juts out into the Bay of Fundy. On a warm, sunny day, it provides great paddling. An onshore gale, makes landings a less than easy endeavour given the multitude of rocky obstacles waiting to catch the unaware. On a calm day like the one in the picture, it's a great chance to observe the tremendous variety of intertidal sea life.

I could easily have spent more time on this coast, but other venues beckoned...
Posted by Michael at 11:14 AM

Great to see your good stuff once more. Your pics have me itching to get underway this week on my own mini adventure with JB. Keep it coming, please.

Welcome back. I look forward to reading all about your adventures. How wonderful to just GO like that.