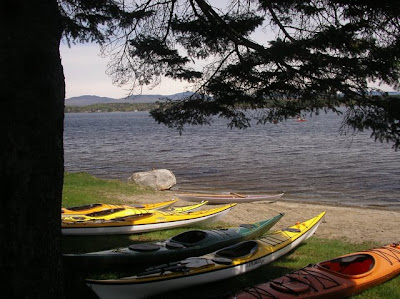 My SOF seen here down at the water's edge was in excellent company last weekend! One of the fun things about attending a kayaking event is the chance it provide of trying out a variety of boats which are new to you. The Rassemblement provided a wealth of boats, some familiar, but never paddled, and some totally new to me. 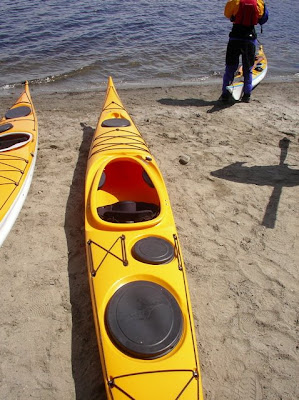 Among the boats were Boreal's new Baffin, a plastic kayak with a nice, flat rear deck which I liked. 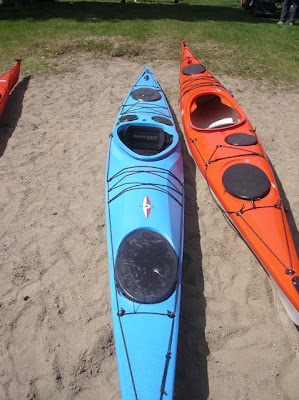 There were several of Valley's new plastic boats as well, specifically a Nordkapp and an Avocet. They seemed well made and nicely laid out and equiped. A couple of older Anas Acutas were also present. There were some Swedish boats in attendance including this blue plastic Point 65° seen here next to the red Avocet on the right. 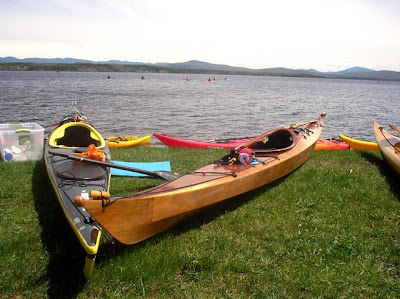 I went out for a brief paddle in this CLC Shearwater 16, the original narrower version. I'd thought about building one of these kit boats earlier in the spring and was happy to try it out before taking on the task. 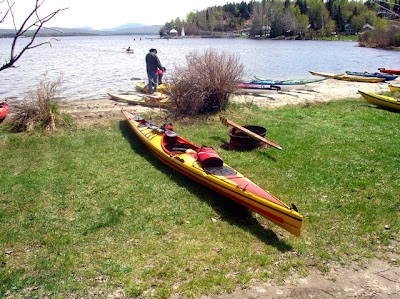 It was a big surprise to see one of the new Skim's, a beautifully made composite boat which I took out for a spin. My first impression was it's amazing length. Looking over the foredeck gave me a real sense of being in a powerful craft that really wanted to travel! I'd just paddled one of the new Maelstrom boats, so was a bit intimated with the Skim's size, but once underway I was pleasantly taken with it's speed and easy manoeuvrability. Lay-backs were easy as well as balance braces. The quality of finish and the brilliant yellow and red striped finish was an awesome sight both on and off the water.

Tomorrow I'll give my impressions paddling the new Maelstöm kayaks!
Posted by Michael at 10:44 AM