Paddling in a Maelström 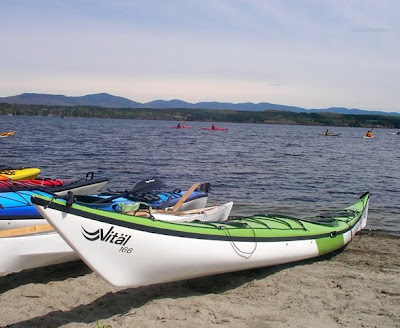 It isn't every day when you get to take out a brand new kayak design and then return to the beach and chat with the designer and other company officers! This happy opportunity occurred at the Grand Rassemblement 2008 last weekend. A number of the Maelström personnel had brought several examples of their company's new boats, the Vaåg and the Vitäl for people to demo on the waters of Lac Megantic.


In this short video seqment, you can readily see the distinctive 'pectoral' stripes which grace each boat. I liked the way it distinquished the boats from the multitude of other designs on the water. The hull shape is also very 'English' in the modern sense and has much in common with the Rockpool and Tiderace boats which have become quite popular overseas. 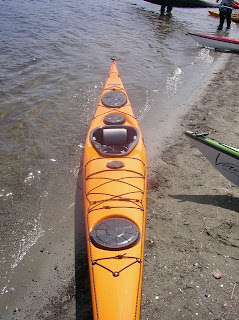 Paddling either the Vaåg and Vitäl was a pleasure. Both track very well regardless of the wind direction and while we didn't have much in the way of wind or waves, both boats seemed little affected by sudden side gusts, even with their skegs up. Edged turns were easy to make, the boat having lots of secondary stability. It was even possible to spin the boat 180° with a single paddle stroke as the ends lift well clear of the water on a lean! Rolling and balance bracing was a snap, especially with the low rear deck and comfortable layback position.

Putting the skeg down and cranking on the paddle produced good acceleration and an easily obtained cruising speed. The boats seem to run on rails yet have a light feel and seem to want to play when you do. I would guess these boats would make the perfect companion out on the ocean and skirting through a rock garden.

Which boat did I like best? Perhaps the Vaåg, but only because I liked its slightly longer length of 17'4" compared to the Vitäl's 16'6". Both boats are serious contenders in the world of high end, high quality kayaks. If you're looking for something in that range, you owe it to yourself to look closely at a Maeström! As for myself, I'm begging you to send in your pocket change. I really want one of these boats...
Posted by Michael at 8:38 AM