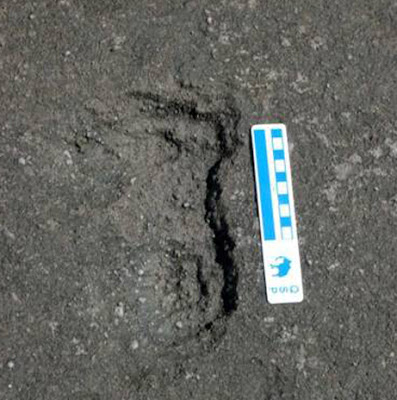 Footprints found in 2003 in Mexico have recently been re-dated to about 40,000 years BP. The fact that they were found along the shores of an ancient lake also strongly suggests that the footprints belonged to early Inuit tourists wintering at one of the Mexican kayaking resorts probably popular back then. From the look at the prints, together with my newly acquired knowledge of muddy footprints, their depth and so on, I'd be prepared to say they were Inuit carrying one of the heavier Canadian style kayaks rather than the lighter Greenland version.

So it's good to know that early Canadian Ckayakers opened the door for me to visit Mexico - 'La terra del Dios' - in the distant past! No doubt I'll be welcomed back to the same paddling spots with open arms and cold cerveza, of course. Like many of you, I've often wondered why the word 'gringo' sounded like a corruption of the word 'kayaker'. Now I know! Science is so cool.

Friday I hit the road on my first paddling trip of the season. Expect posts to drop off until/unless I find internet in unexpected places...
Posted by Michael at 1:20 PM

Hope to see the stories here soon, I'm writing about kayaking too but never went on a long kayaking trip

Safe travels...and good luck with your new found knowledge of archeology. That fellow who left the print had one hell of a paddle against the gulf stream!