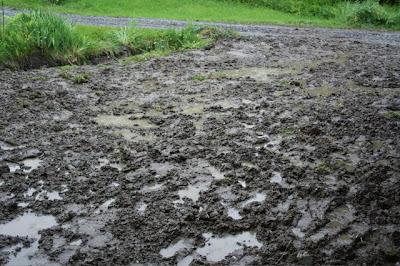 Just when I'd finally made some decisions on where and when I was going to paddle this spring, my contractor called and suggested a date he'd be free to do some work on the foundation to the house which has been pending for a while now. He promised me three days, "probably less", to get the job done. What could I say? Let's do it!

Then the rains came... This is day three of almost continuous downpour. The picture says it all. The job is finished, but how can I leave this mess behind? So it's back to decision time: when and where to paddle? It's looks like I'll leave next week after I've had a chance to get some grass seeded on this mess. First I'll head up to Toronto to the PaddleFest event and meet Justine Curgenvan and Dubside. Then it's west to Killarney and on into the North Channel area where I used to sail. I'll follow that up with a Greenland event on the Hudson River.

I figure this couple of weeks or so of fresh water paddling should whet my appetite for the East Coast in July!
Posted by Michael at 9:42 AM

There's an old Chinese proverb to the effect that "...when a house is finished, a man dies..."

How far east will you likely be travelling??? Jim's anxious to compare teardrops, there's several new VKs to test-paddle, and most of the coastline was still there last time we checked...so are you coming over?

So it's sounding like we won't be seeing you at Greenland on the Hudson? Bummer. Oh well, having too many fun things to do is a good thing.

I can just see the WeeOne having a ball in all that! He misses you!

Bonnie - See ya on the Hudson!

Kristen - Bring the boy over... There's nothing like mud for having a good time!

Hi! Wandered in here via a series of links and spent quite a bit of time. I deeply envy your little camper. Great paddling posts. I'll be keeping up with you--thanks!