This posting is a continuation of the previous three about paddling around Philip Edward Island in the Killarney area of Georgian Bay. Having completed the island tour, I returned to the Park put-in to re-adjust some of my equipment (left off some surplus-to-needs items and picked up my pump which had been left behind. I then set out for the town of Killarney and Baie Fine. 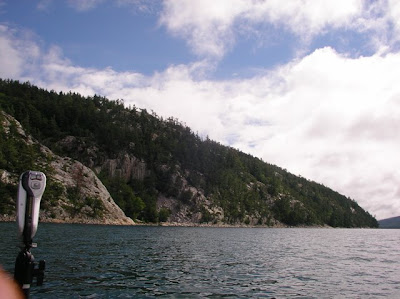 A day later, I camped about half way up the fjord-like Baie Fine and the following day took off for the 'Pool' at the very head of the Baie. I'd sailed in this area years ago, but never had the time to more than peek into Baie Fine, so reaching the Pool was a long held goal. I was excited to see this long sought spot! 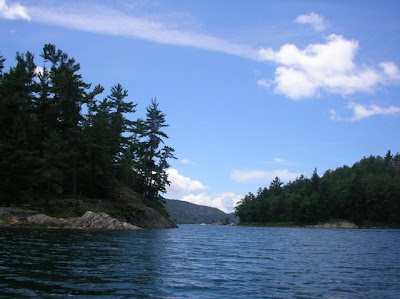 Leaving my camp intact, I crossed to the opposite shore and followed the white hills with their tree speckled covering until I reached the narrows. At this point, the Baie closes in on itself and becomes a quarter of its width. 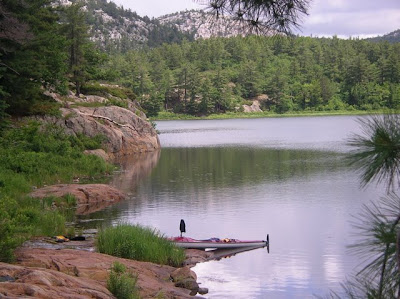 Lunch time had me hauled out on a pink granite 'beach'. I'd made it to the Pool, the quiet ring of water at the head of Baie Fine. I could see why so many boaters set this place out as a destination. Surrounded by high hills and dense forests, it's tranquility was total. I visited a small pond created by beavers just a few feet above the Pool. After lunch I paddled around and examined the shores for signs of other wildlife. I saw nothing, but birds of all sorts. 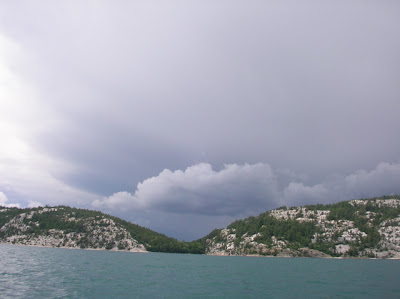 The paddle back to the camp I'd left setup from the night previous turned into a race against a thunder storm moving in from the west. Just as I made it into my tent, the rain came pouring down and lasted for several hours before clearing. 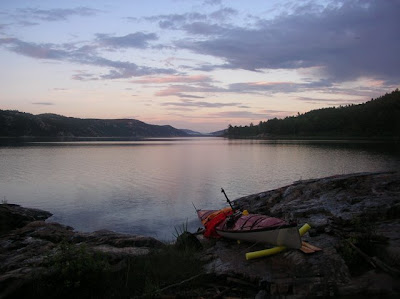 The skies cleared again in the evening giving me a sunset view up the Baie as I cooked my supper. As I took in this scene, a beaver came out of the wood not five meters from me dragging a freshly cut alder branch to the water's edge. There it began chewing off all the smaller branches one by one. Finally satisfied with its work, it entered the water and slowly circled. Suddenly it seemed to sense my presence. It slapped its tail on the surface in warning and plunged into the depths. A moment later it surfaced and continued to swim about, finally heading along the shoreline, out of sight.
Posted by Michael at 8:48 AM

Thanks, Michael - very nice descriptions of an area that I'm starting to feel an itch to see and paddle. And you know me well enough to know that that's high praise indeed, for both author and locale...
Keep 'em coming...
Off Sunday for Eastport...you've got our number...