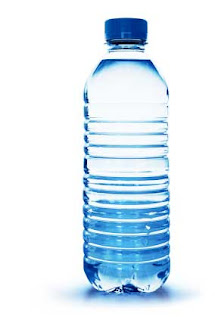 Let's face it, we all do things now and then which we know are dumb. Sometimes we get away with the act and sometimes we don't. Here's a lovely example of one of those latter acts...

Our neighbour's woodworking shop burned to the ground the other night. It looks like it was deliberately set, so a rent-a-cop was hired to keep an eye on the scene until a complete investigation could be carried out. Now sitting in your car, out in the middle of nowhere, watching a smoldering ruin, just isn't the most exciting thing in the world to be doing. The rent-a-cop had his boxed lunch and finished off his water. Down went the car window and out went the empty water bottle.

My daughter happened to be looking out the window and saw the bottle fly into the ditch. Out she went. She walked over to the bottle, picked it up and approached the rent-a-cop's car. Just imagine the scene. A total idiot, pretending to uphold the law, gets his litter back from someone half his age. Humiliation or what? It made my day.

Even better, the arsonist has been arrested. Twenty-three years old. Now that's just plain sad.
Posted by Michael at 12:23 PM