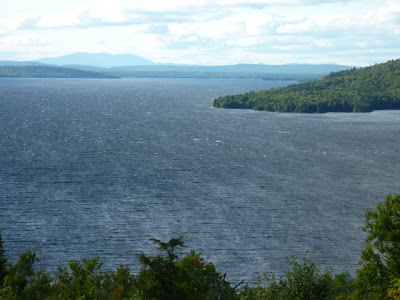 My paddling adventures were interrupted for a few days by high winds which churned up the lake especially in the longer reaches. I wondered whether the lake was relatively shallow to produce so many whitecaps. Certainly there are many shoal areas, well marked for the power boater and sea-plane operator. 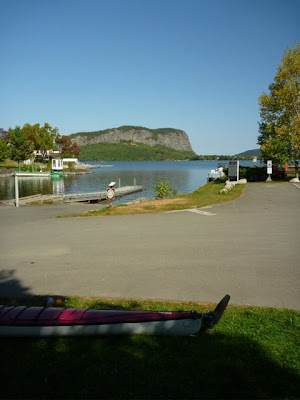 When I did get back on the water, it was to paddle around Mt Kineo, an island right at the narrows of the lake, between the 'head' and the 'antlers'. This interesting place was well known to the Native Americans as a source of stone for making weapons. It was also something of a meeting place and perhaps a treading center. Chert from as far away as Nain, Labrador has been found on the mountain as proof of this trading activity. 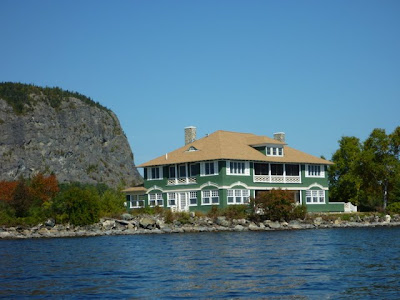 Starting at the public launch in Rockwood, I paddled across the lake towards Kineo. This attractive house with the cliff of Mt Kineo in the background got my attention.

There is a narrow isthmus on the east side of Kineo linking it to the mainland and providing road access of a sorts. I say that because the secondary roads in this area tend to be unimproved dirt logging roads when can be quite rough in places, best traveled by truck. The small bay on the south side of the isthmus is protected by a rocky bar and can be quite shallow in places. I made a short portage across the road, and once on the north side, I found a nice gravel beach where the waters deepened quickly. 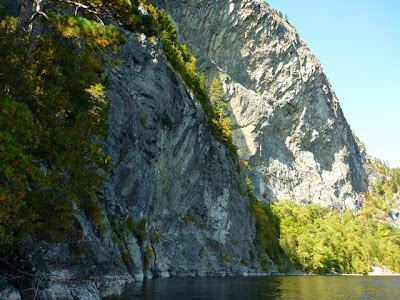 It is from the vantage point of this bay that the cliffs of Mt Kineo really become quite dramatic. In places, one seems to be under their high cathedral-like over-hanging rock faces. It's as if one is entering an alcove. It was difficult to photograph, but very inspiring and awesome. 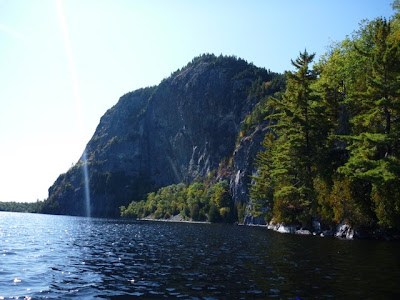 After a quick lunch, I continued around the island, the north side of which is typical of the many islands of Moosehead Lake: rocky shores, backed by dense woods, with little or no beach. 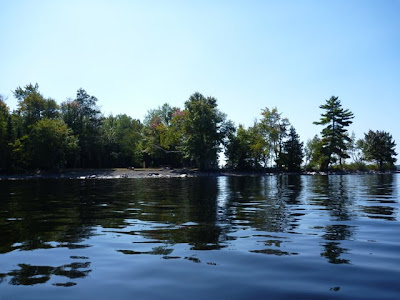 On the northwestern tip there was a lovely campsite on a piece of open level ground, the first I'd seen.
Posted by Michael at 9:25 AM