Back in Bonne Bay 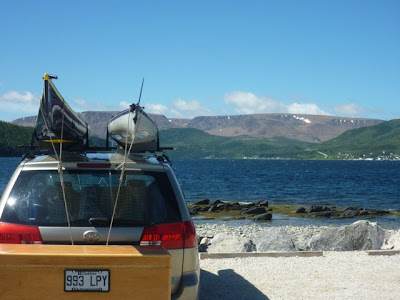 Although I have now been lucky enough to visit Gros Morne National Park on several occasions, it is always a pleasure to paddle on the waters of Bonne Bay. Every time I have, the weather has been superb and the water has not disappointed. Once again it was interesting to see the brown, barren Tablelands looking down on the bay and wonder how on earth that odd chunk of mantle made it's way onto the surface when it ought to be miles below our feet 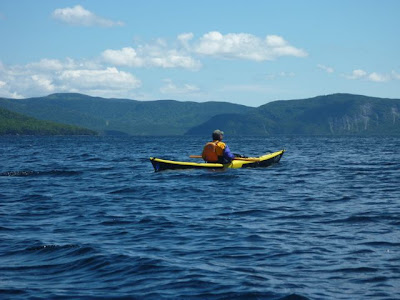 Jeff Dawson, of Ottawa, tried out my Vaäg on the morning run down the bay. We headed off to look for an osprey's nest, but winds and waves decided we ought to head elsewhere. Turning around we passed a cliff and surprised a moose with her calf doing some height training. Moose can be a problem on the roads on Newfoundland, but having one fall into your boat would not be much fun either! Thankfully momma moose had her baby well in tow and there were no accidents! 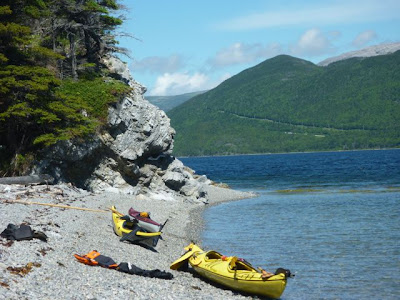 There are several places to pull out for lunch. This was our choice, colourful pebbles and dried out moose droppings added to the ambiance... 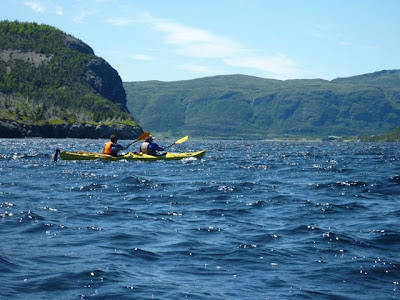 With only two kayaks between four people, we rented a double from the outfitter in Norris Point. It got the job done getting Mairi Watson and Scott Pashley up and down the bay. We're heading back to the put-in after a great day on the water in the photo above.
Posted by Michael at 8:37 PM

Michael, Gross Morne is on my list of must paddle places. Hope you enjoy your time there and if you come all the way east let us know and we'll get out for a paddle.