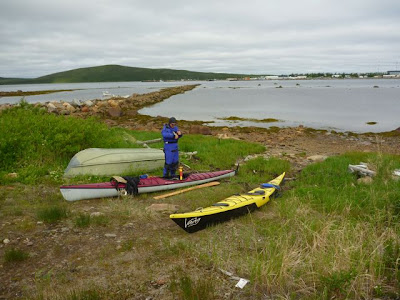 If you're up on your Norse Sagas, you'll recall mention of a golden strand of sand discovered in the world to the west. It turns out that endless stretch of sand is located on the coast just north of Cartwright and I had the idea it would make a good paddling destination on my Labrador trip. We suited up and launched using Experience Labrador's hospitality and water access. 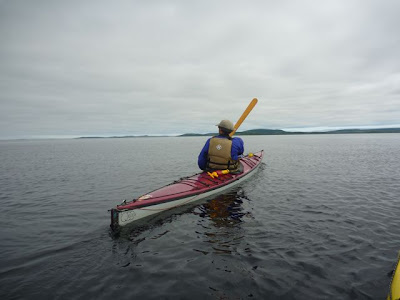 Out we headed in almost calm seas, ready for a day's adventure. To be on the safe side, we decided we'd use some islands along the way as a wind shadow for the east winds expected to build up during the afternoon. That would also allow for two short open water crossings rather than one longer one which was reputed to have adverse tidal issues we could avoid. 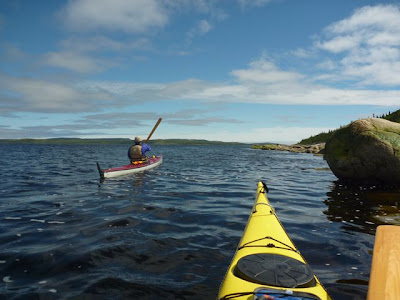 All went as planned, but when we reached the first crossing from the mainland to the first island, a good sea was running and it was still morning, long before the arrival of the expected winds. What to do? 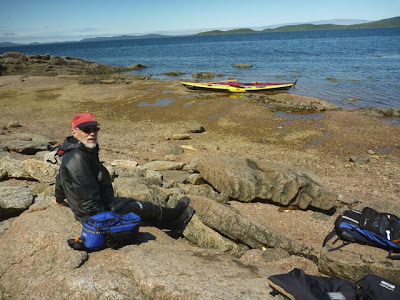 While we wondered what to do, we decided to do some fishing and have lunch. The waves continued to build and as time went by, I knew we weren't going to risk crossing the now white capped channel. We continued to fish and I went out to surf in the waves to get an idea how serious they might be in the planned crossing. 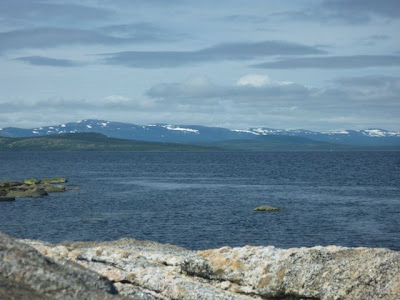 The warm weather began to work on our heads. Why paddle into the fray when we could have fun where we were, surfing, fishing and playing? The Viking strand could wait for another day, couldn't it? 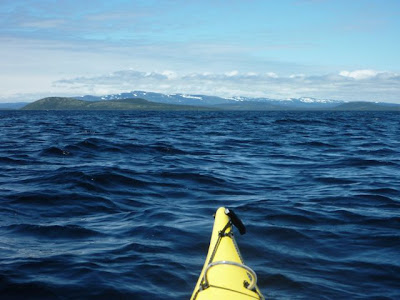 We headed out in the waves to play instead. It was weird seeing the snow still on the hills ahead of the boat as we sweltered in our drysuits, but that's part of paddling in Labrador. Things are not always what you might expect.
Posted by Michael at 1:49 PM