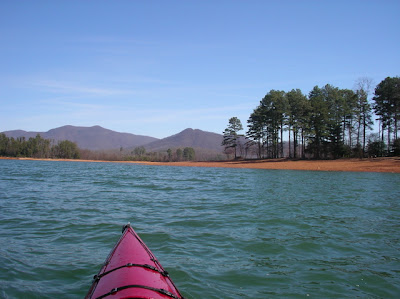 The weather was right and the lake was ice-free - a wonderful change - so today I paddled.

As I mentioned previously, Lake Chatuge is actually a flooded valley, so it has the typical meandering shoreline those lakes often have. Since I had paddled into North Carolina the last time I was here, today I headed south. There was a rising north-west wind, but I decided to head down-wind anyway thinking it would provide some fun heading homeward.

Most of the lake's southern shore has been built-up compared with the northern section of the lake. It's definitely cottage country, if you can call some of the mansions 'cottages'. Perhaps they are only in the sense that they are 'seasonal use' homes. Relatively few people seem to live here all year around. Instead many people drive up from Atlanta to escape the summer heat of the city. 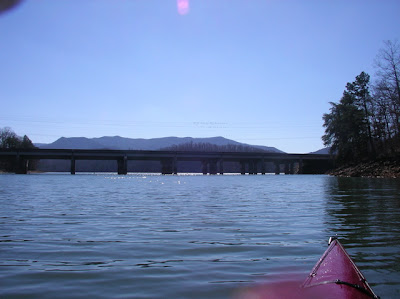 I paddled under the bridge that carries route 76 eastward where the lake again breaks into two sections. The hills in this picture are part of the Appalachian Trial route which I wrote about a few weeks ago. I headed westward towards them for about another few kilometers before turning around.

The wind had really picked up as I knew it would, making the return trip a fun slog into the waves. Just the thing after waiting for nearly two months to get out on the water and warm up my paddle muscles for another season on the water.
Posted by Michael at 8:31 PM