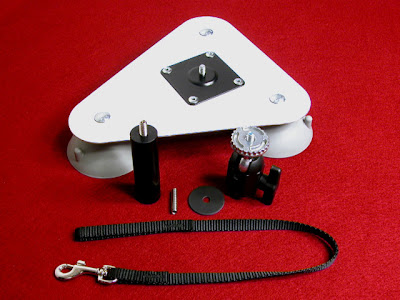 Thanks to a little reference to it made on Kristen's blog the other day, I discovered the missing piece to the puzzle of making TITS style videos as I paddle. The missing piece is the suction cup device and attached extension arm which allows you to place the camera wherever you want on your boat. Up until now I had been using a mini-tripod and hooking it under the deck bungies, but this was a really make-shift arrangement.

The new device is sold by Sticky Pod. There are several different styles, some with three and others with four suction cups. Extension arms of various lengths are available so the camera need not remain at deck level. The company claims they will remain attached at up to 40 mph which suggests that I am pretty safe heading into not just wickedly fast tide-rips, but some serious white water stuff as well!

I've ordered one and will be trying it out on my upcoming Florida paddling trip in a couple of weeks. I'll post a report - and some videos - when I return, if not sooner.
Posted by Michael at 10:16 AM

look forward to your videos!
is florida not going to be too hot for you? if you are acclimatised to the chill?

me again, i cant view the SLAP site at all, are you seeing it ok? I have some upgrades on the pc and am just wondering if they are interfering with it?

Claire - you seem to be right about Sandy's SLAP site. I was there recently, but today I find I get an error message "Server stopped". Let's hope it's temporary. I was enjoying rreading about her progress.