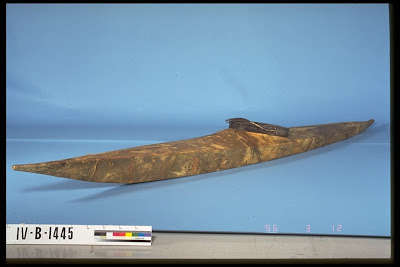 The kayak in the picture above is in the collection at the Canadian Museum of Civilization in Hull, Québec, across the river from Ottawa. I have not seen this boat personally, but when I lived in Kangirsuq in the 1970's I was lucky enough for meet the builder, Tuumasi Kudluk. He was an interesting Elder, a story-teller, artist and craftsman. One winter he began building another qajaq much like the one in the picture and I spent many afternoons with him in his workshop watching him at work, sitting in a pile of wood shavings, his eyes sparkling. I can still see him drilling holes in the frame, threading the braided caribou sinew lashings and tightening the various parts of the frame.

I wish I had paid greater attention at the time and taken pictures of him at work, but I didn't. I had no idea at the time that I was a witness to the changes that have since taken place. I assumed he and others like him would continue to build qajait. I was wrong. He probably built the last one. My only pictures of him were taken when I made some 8 mm movies of a fishing trip his son-in-law and I made up river one August afternoon. Tuumasi went with us to go hiking. Even as an old man, he loved being out on the land, taking in all that Nature had to offer. He would often be gone for several days at a time when he returned to his 'home' on the land.

My wish is for a place in Nunavik where young people could learn to buildtheir own traditional kayaks, to paddle them and take pride in celebrating and extending this kayaking heritage through a number of events. So far it hasn't happened, but it will. I have recently become aware of a whole network of bloggers in the Canadian arctic. These people beginning to be aware of each other and little seeds will grow. I am getting excited by the potential I feel out there as these people become aware of their cousins in Greenland and elsewhere where kayak building, paddling and competition is enjoying an amazing revival with a modern twist.

Wouldn't you love to see Tuumasi's boat in the picture being reproduced, perhaps with a canvas or nylon skin so it would last longer with less maintenance? Wouldn't you like to see them evolve to meet the needs of modern paddling goals? Don't you think it's time these boats 'lived' again! I do. I'm thinking of building one of these boats myself. It's on my 'to-do-list'!

Photo with kind permission of the Canadian Museum of Civilization, Ottawa, Canada.
Posted by Michael at 12:24 PM

That would be wonderful. Such action is already on going up in Alaska. The traditions must be passed on.

One hears of traditional qayaq being built here and there. I know that there was a frame built by elders and students in Arctic Bay several years ago and it happens in other communities also. But it is definitely just dribs and drabs and nothing consistently being done to reclaim this art.

There is a bit of a resurgence in interest in qayaqing with modern qayaq here amongst the youth. With the three or four qayaq in the community being shared. You see them out all night in the summer on nice days.

One other qayaq note. The qayaq in Atanarjuaq - The Fast Runner is made of fiberglass. The fellow who made it lives in Iglulik and is a former HBC boy who stayed. It is, I believe, a replica of a qayaq which resides in a British museum.

Thanks Clare. Yes I know John in Igloolik who made the qayaq seen in Atanarjuat.