My original plan was to spend several days on the Ooglit Islands, taking the time to really see everything there was to see both on the main island as well as the several smaller islands in the group. This was not to be however. When I got up the next day, I knew instantly the weather was unsettled and going to get worse. For the second time, this mysterious island didn't want me to pry too closely into its secrets. It wanted me to leave. 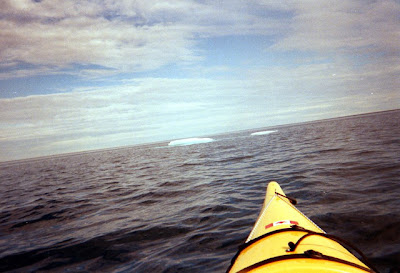 I broke down my camp and reluctantly packed my kayak and launched. I paddled around the west coast, the one I'd not seen on my first visit and slowly searched the shores for anything that looked interesting. I felt I had the time to beach the boat and run up for a better look, but I kept getting the feeling that I shouldn't linger too long, but head for the mainland as soon as possible. 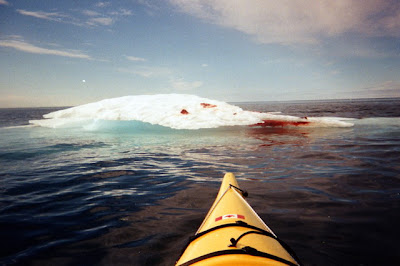 Finally, I committed to the passage. The weather was clear, but fitful patches of wind would come and go. Tidal currents swirled about me, suddenly lifting my stern to swing me around unexpectedly. I focused on my compass bearing and tried to make sense of the low-lying coastline ahead of me.
There were several pans of ice floating here and there along the way. One had a large blood-stain suggesting a seal had been killed on it, perhaps by a bear. Others had flocks of birds on them, many of which flew over to check on me, flying quite close to the boat, squawking in protest.

By mid-day the mainland appeared and I could figure out where I was. The winds had picked up considerably. Ice pans were stranded by the dropping tide and I made a slalom course through them, both for fun as well as to get out of the wind. 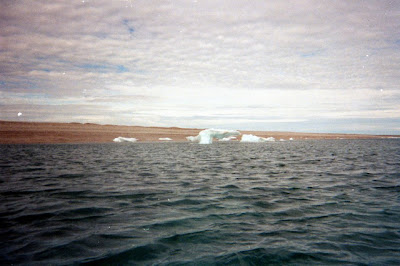 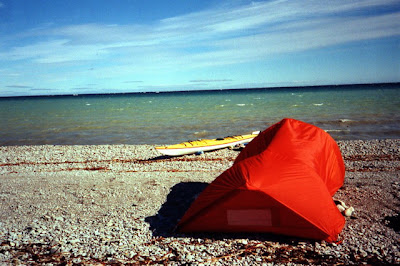 I stuck close to the shore, staying in the wind shadow to make better time. I stopped briefly for a snack and to refill my water bottles, but generally kept paddling until supper time. Knowing that the wind would most likely continue to blow, I buried the tent lines in the loose gravel as well as the extensions to the fly I'd added in case the winds got worse. Good thing, as they got a lot worse that night!

I'll continue tomorrow...
Posted by Michael at 9:28 AM

Interesting shots. Good piece. I am really getting a feel of the trip and what you experienced.