Got that Sluggish Feeling? 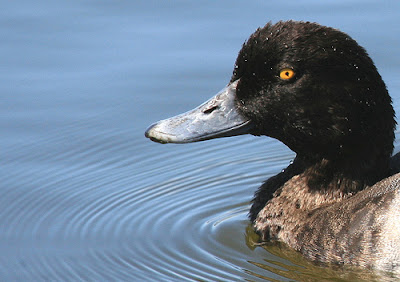 With the daytime temperature outside currently at - 23°C, perhaps it's a good time to wonder about the role that temperature plays on water when we paddle in different climates. As the duck's bow waves in the picture suggest, water has to be pushed out of the way, to the front and sides if we wish to move anything through water. Thus when we move our kayaks through the water, we say, we "displace" the water, mostly to the side of the boat, and then the hull's passing allows the water to re-fill the space left behind. This is why paddling takes some effort on our part. It is the reason behind those numbers in SeaKayaker Magasine's boat reviews comparing the 'speed/resistance' of the boats being reviewed. Those numbers give us an idea about how much effort it takes to push the water out of the way.

Some hulls have lower numbers than others mostly because they are designed to push the least amount of water out of the way. Water is water and it resists being moved. We call this resistance viscosity. However, just like molasses, water will react to changes in temperature, so that warmer water will flow - move out of the way - faster and more easily than colder water. In fact, water's viscosity will double with a temperature change of 25°C, about 3% per degree centigrade. This means it take about twice the effort to paddle in, say 5°C water as it takes in 30°C water. No wonder so many people like to paddle in the tropics - it's easier!

I suppose this means that those planning expeditions to the high latitudes will need to train for endurance, the long slog, while those with tropical expeditions in mind can focus on speed. It brings to mind the feeling I had last December when I thought my kayak was acting sluggish as I paddled my usual route. It really was!

Photo by 'jurvetson' from his FlickR site.
Posted by Michael at 12:37 PM