The wind rolled me right over in my tent that night forcing me out to re-bury the lines and the fly. With little in the way of a wind-block, I was at times hard-pressed to find shelter for cooking as well. In the end, I paddled whenever the wind died and returned to shore when in picked up again. 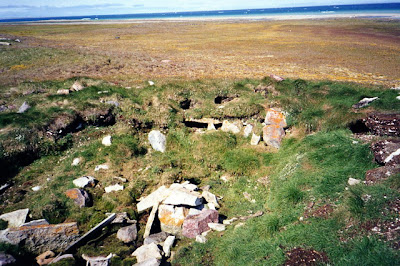 My forced shore time saw me walking miles of beach and tundra. In the above picture I came across another Thule Culture dwelling. This one was being lived in by new tenants, a family of foxes! I suspected as much when I saw the lush green ground cover from a distance and sure enough, I found young kits hiding just inside the tunnels their parents had dug into the old house. 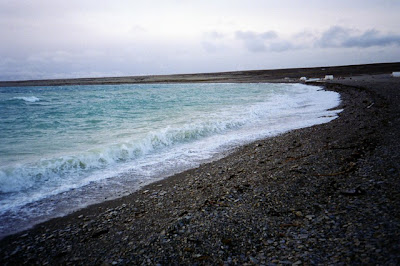 Turning the corner westwards brought me to within a day's paddle of Igloolik, situated on an island about 5 miles or so offshore. Once again the winds held me on the beach, but this time I had company. A group of Iglulingmiut, two families actually, were camped near a small stream fishing. They too were pinned down and waiting for a window in the wind which would allow them to cross over to the island. We all waited for five days before there was a break in the weather.

I left a few hours after their big freighter canoes did. The water was very choppy and bouncy without any set wave pattern. Several times I looked back thinking I was over my safety limit, but I kept on. I knew people on the island were aware I was coming across and eventually I could see 4-wheelers on the hill tops looking for me. In a way, they 'pulled' me over and I finally arrived at midnight, a 3 hour paddle. 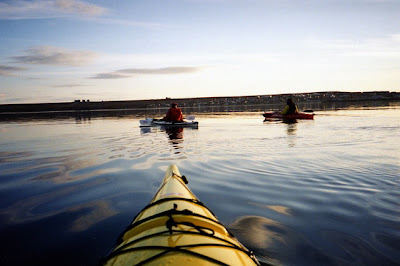 The following day was totally calm and I went out for a midnight paddle with a few of the local paddlers. 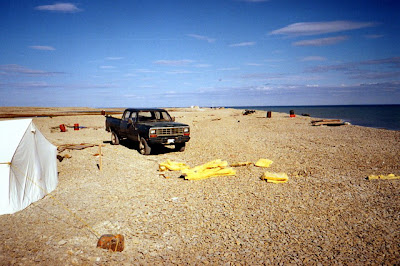 I also got a chance to drive out to the old hunting camp at Iglulik Point where people were now beginning to build 'cottages' out of old building materials which became available as newer houses were built in town. So much had changed in the intervening years, but it was marvelous to be back with old friends!
Posted by Michael at 1:37 PM

What a great story of promised accomplishment! I wonder if I know the folks you met on the beach in 1997. Do you remember visiting an island called Avaaja? It is quite close to Igloolik and has some marvelous sod house remains.
Do you have a collection of these stories just waiting to be shared on your blog?
Thanks for the comment on our blog! It's great to make new connections with fellow arctic-lovers!
jennifer

Hi Jennifer - yes, I do know Avaaja, to the west of Igloolik. There are many old house remains in northern Foxe Basin as you probable know. I was met by Leah Otak and Naitani Komaniq and some of his family when I landed, just below his house. I'm still in touch with Leah now and then.

Wonderful Michael. Can't wait to read more about Iglulik in the 1960s and see more of your pictures. I remember how slowly I came to realize just how recent the transition from living on the land to living in town was. The realization came one spring when we were seal hunting and stopped on the way back for tea at a place called Qikiqtarkat just south of Adam's Sound. There was a raised beach there and my wife pointed to it and said "That's where Tina Pauloosie used to live". Sure enough we walked up and there were about three qarmat there and the sundry signs of lives lived. I was talking about how incredible that was and Leah looked at me strangely and said "Mom and Dad just lived over that hill". They moved to Arctic Bay in 1969! When I try to explain to people just how recent the change is I tell them that had I been born up here I probably would have been 12 or so before moving off the land.