Even More Fun Under the Ice! 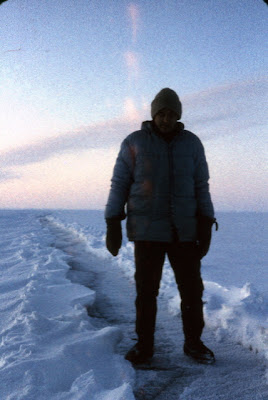 I was astounded by the amount of life that existed in the cold, dark arctic lake water. Instead of being the crystal clear, barren water I was expecting, it was murky with suspended living material. At the water/ice interface hundreds of small shrimp-like creatures scurried about, as though skating upside down on the ice. Some had been accidently frozen into the ice itself and wiggled in little liquid bubbles. Others had already become solidly frozen in place, I suppose, until spring released them. I have no idea whether they survive this bizarre experience, but perhaps they can.

We set up several gill nets leading away from the diving hole and faithfully checked it twice a day for several days. In spite of the waters teeming with life, we failed to catch a single fish. Apparently there were lots to be had during the summer season, but we failed to find them in the winter.

One event which gave us a scare occurred when my diving partner lost his weights while checking the net. His belt suddenly let go and headed to the bottom of the lake while he bounced up to the bottom of the ice, totally helpless. He tried to swim along the surface, but was hampered by the slippery surface and his SCUBA equipment. Tugging his life line only seem to make matter worse as he was worried about getting dangled in the nearly invisible gill netting. In the end, I was able to pull him to the hole where we exited, but for a moment it was a scary feeling being so helpless in such an alien place. Thoughts like being frozen into an ice bubble went through his mind... 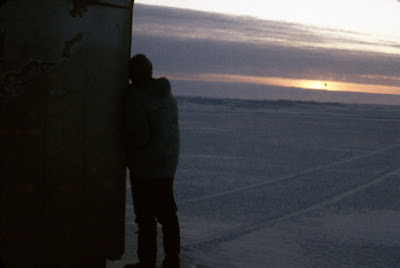 The week ended all too quickly, and we headed back to Cambridge Bay in the snow machine, crossing this large sea ice crack in the top picture along the way. Starting the frozen, stubborn engine of the snow machine in the cold morning was always a chore, but spraying methyl alcohol straight into a carburetor already warmed up with a blow torch, soon had us up and running... not something I'd recommend anyone attempting on their own! We also made a few stops to use the 'facilities', a rather chilly experience at this time of year and, of course, no privacy whatsoever!
Posted by Michael at 11:28 AM

amazing experience!
love the skidoo machine, it looks so useful its a surprise they are not still being made.