Under the Ice - for Fun! 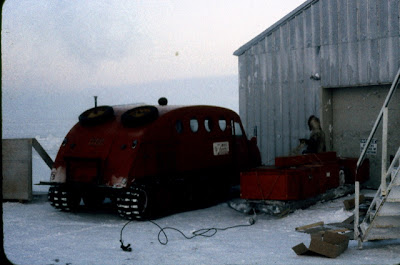 When I was at university, I got a call from some people I knew at Canada's Fishery Research Board (FRB) wondering if I would like to go to the arctic to go diving under the ice in mid-winter. Natually I was concerned about my studies and a host of other important items, but after a pause of 30 nano-seconds, I signed on making up a team of three, two of us being divers.

We flew out to Edmonton and then north to Cambridge Bay. Once there we bunked in with a few 'old hands' as people called them back then, men who seemed to have lived most of their lives in various arctic towns with no visible means of support other than being handy at just about anything. When one old guy discovered I was a university student, he proudly informed me he had obtained his whole schooling off the back of match-boxes. As a chain-smoking man, he considered himself rather well educated, and in many ways, he was! 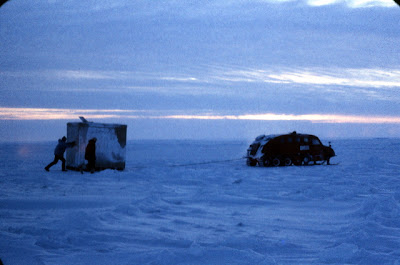 We hired an Inuk snow machine driver to pull an 8 x 8 x 8 plywood shack on skids over the sea ice for about 40 miles to a small lake where the men from the FRB had been conducting a lake productivity study the previous summer. Once there, we set to chain-sawing a hole down into the lake water, about a meter down into the ice. That was done with the usual amount of cursing and tom-foolery associated with working outside when it's far too cold to work outside. Then the hut, which had a diving hole set into the floor, was manouvered over the pool of smoking water. We then banked up the shack's sides around the bottom with snow blocks to prevent the water from freezing too hard over night. Finally, after a long day, we retired to a local Inuit house for the evening. It was dark by this time and about -40°C, so we were ready for something warm to eat.

Note: the snow machine we used was built by Bombardier, makers of the 'Ski-Doo'. It was an incredible machine seating 7 people more or less comfortably and was once seen everywhere in Canada's arctic. Alas, they are now only seen in museums. The Bombardier company now makes planes and subway cars around the world and recently celebrated the 100th anniversary of it's founder, Armand Bombardier.
Posted by Michael at 4:56 PM