But First, The Ooglit Islands

The Ooglit Islands were the first of my objectives during my return to the Igloolik area largely because when I had been there previously I had felt it was a special place. In particular, I had seen a large circle of stones and wondered about its origins. The word ooglit in English means 'a place where walrus haul out', so that was another reason why a visit was in order. 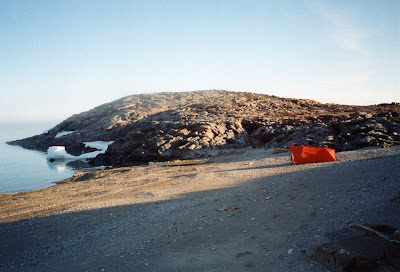 As soon as I was safely on the beach, I set up camp, made certain the boat was above the high tide line and then set off for a quick look around before I bedded down. 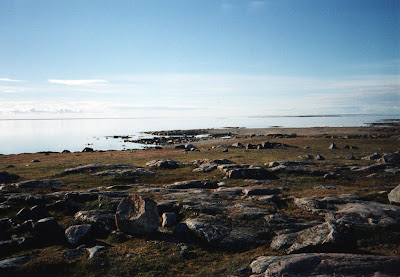 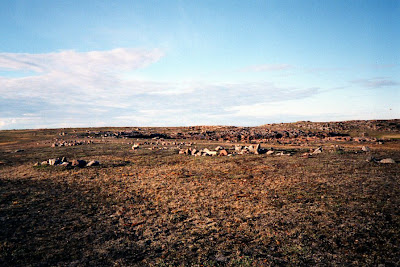 There were several shallow bays along the west coast and nearly all of them contained ancient tent rings, lot and lots of them. Obviously in the distant past, lots of people had come here for some particular reason, most likely in the summer open-water season. Everywhere I looked lemmings were running in and out of their tunnels and arctic terns screeched overhead, no doubt anxious about their new visitor's sudden appearance on their exclusive island home. 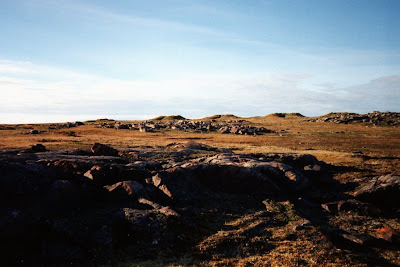 Looking inland from the shore, I could see a series of bumps lining the ridge above me. As I approached them, I could see they were the semi-underground houses typically made by Thule Culture people long ago. There are many such dwellings in the northern Foxe Basin area, the name Igloolik meaning literally, 'The place with houses'. It was a rich hunting area then and still is today. 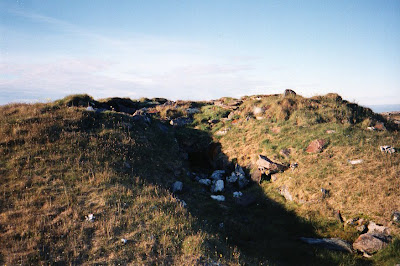 The houses themselves were usually built by digging down into a ridge of ground, with a burrowed out tunnel leading into the main circular interior. The floors were often laid with flat stones and a bench and sleeping platform ringed the walls, much as is still seen today in a snowhouse. The roof was usually made by arching a framework of whales' jaw bones overhead which were covered with a skin sheathing. It's possible the roof was then covered with a sod insulating layer, although I am not certain of this. 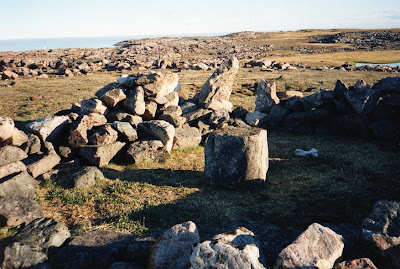 Beyond the ridge, I could see the mysterious stone ring lying close to the eastern shore. The ring was loosely built of large stones and was about waist high. A large stone block sat in the center, looking like it had been given purposely squared sides and top. I have no idea what the site was used for although it appears ceremonies of some sort may have been performed here. When asked by outsiders like myself, most modern Inuit pretend an ignorance of what used to happen long ago on the Ooglit islands, but I suspect there are stories told even today of its wonders. I hope so. It's impossible to walk around the place without feeling its power and mystery and the stories that explain it must be kept by its inheritors.

It had been a long day. I was really beat. The midnight sun had allowed me to explore part of the island after my arrival, but it was time to eat and get some rest.
Happy Valentine's Day Paddlers!
I'll continue tomorrow...
Posted by Michael at 11:32 AM

I am thoroughly enjoying this journey, Michael. And great photos.

Michael, thanks for the ongoing education. The possibilities of secret rituals fascinates me. All cultures seem to have had them, however I do not recall reading of any related to the Inuit.

Silbs - I'm don't think the ceremonies were secrets among the Inuit themselves, but today there is a hesitancy to speak about them with outsiders, perhaps due to the church's efforts to eradicate the old beliefs in the past. In any event, this island remains a very powerful place to visit.

Your photos are amazing. I can tell these were taken with a film camera. My eyes have become so accustomed to the precision of digital photography that these stand out for me as something dreamy, organic, and fluid. They have a deep quality of motion and reflection about them. Your thoughts on Inuit structures and tent rings reminds me of the book "Ancient Land: Sacred Whale … the Inuit Hunt and Its Rituals," by Tom Lowenstein. It's a very poetic and captivating account if you haven't already read it.