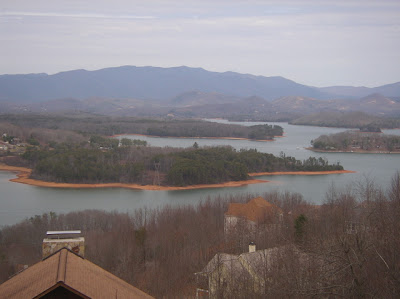 Lake Chatuge, seen in the picture is one of the many lakes created by the Tennessee Valley Authority years ago. This was a huge hydro-electric project which began in the state of Tennessee, but actually encompasses several surrounding states as well. The near shore of the lake rests in Georgia and the far shore and mountains in the distance are in North Carolina. Tennessee lies miles away to the left of the lake.

The shorelines reveal the true nature of the lake. It's not a natural lake, but rather a reservoir, created for holding water until it's needed by the power system it feeds. At the moment, the wide shores reveal the lake has been lowered over the winter months. Beginning in March, the sluice gates which empty the lake will be closed and the water level will rise once again in preparation for next year's draw-down. As a result people using the lake often use floating dock systems similar to those seen in tidal areas.

The weather is still cold, rainy and blustery, but before I head further south, I want to get out for my first paddle in February 2007, making it the first year I have ever paddled every month for a full year. I know others manage this feat with ease, even many folks living in Canada, but the goal had eluded me until now.

Update: I'm reminded by a reader that I have paddled each month of the past year already as I was in Florida at Sweetwater last February! I'm still going for a paddle on the lake in the picture however! Thanks EB.
Posted by Michael at 8:31 AM

Congradulations on achieving a paddle a month.