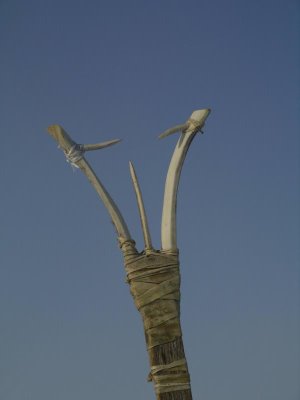 I'm having a shore day today. It's just too windy, rainy, cold and nasty to think about heading out for a paddle. Besides, I have a sprained knee for some reason and a day off would probably do it good. Instead, I began thinking about the Inuit in Kangirsuk, a community on the western side of Ungava Bay, Nunavik where I spent a few years teaching.

About this time of year the people there can begin using their snow-mobiles to head overland up the river to go ice fishing. Once one gets above the tidal part of the river, it will ice over and there are some good spots where people set out their gill nets. This is done by opening a series of small holes in the ice and stringing the net from one to the other until the whole length of the net is stretched out. Only the holes at the ends of the net are marked with sticks because they will be used again when checking the nets. The nets nowadays are left until people can get back to them usually on the weekends, and sometimes more frequently. In the old days, they were checked nearly every day as people lived close by.
When I was living there, we would head up river on the weekends to see how the nets had done. We'd open the ice holes at both ends and tie a line onto one end. The net would be pulled out of the ice hole at the other end and cleaned of fish. It was usually so cold that the fish were frozen within minutes of exiting the ice hole. Once the net was cleared, it was pulled back into the water and left for another week.
Once that work was done, it was our turn to fish the traditional way using a 'kakivuq', the fish spear shown in the picture above. For this, you opened a hole in the ice then lay down and peered into the water. With one hand a small lure, usually a little piece of something white, like a small bone, was jigged a couple of feet below the bottom of the ice. The 'kakivuq' was held up-right with the business end in the water just above the lure. Fish attracted to the lure would then be speared and then quickly pulled out of the water to be removed. The 'kakivuq' was a deadly device and very efficient at catching and keeping it's prey. In the old days, one made sure to lay out the catch in a circle around the hole. That way one always remained within a school of fish and your catch would increase accordingly!
Sunday night we would make our way back to the village of Kangirsuk for another week. Fish was on the menu almost every meal during the winter, served up with tasty 'misaraq', a slightly rancid seal oil dip, no doubt full of vitamins and other goodies to get you through another arctic winter!
Posted by Michael at 12:40 PM