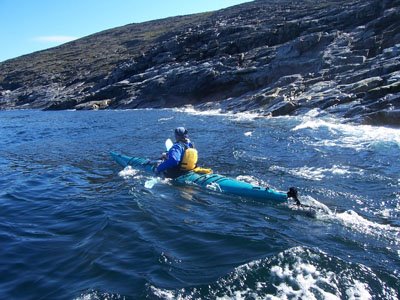 "On August 31, 2006 six youth from various Nunavik Communities have traveled along the Hudson straight (sic) communities in Nunavik through kayak to promote a healthy life. The project begun on a foggy morning August 1, 2006, in Ivujivik, the northern most community in Quebec. The purpose of this project is to travel around Nunavik by kayak to encourage and motivate youth in Nunavik to live and maintain a healthy life. This is a method of telling youth that suicide is not the answer and that there are people out there to support them whenever it is needed. A great emphasis will be put on the culture preservation, and bringing back the traditional kayak to the Inuit method of transportation on rivers, lakes and oceans." 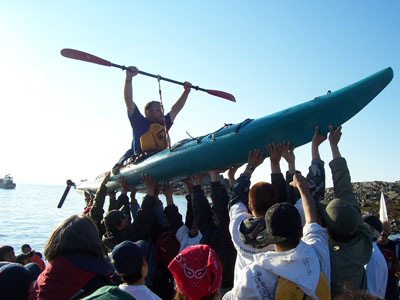 Every now and then a bright light shines out of the Canadian Arctic because someone has done something new and exciting. Here is a case in point where young people are being introduced to kayaking. While this endeavour is really good news, obviously the next step is to begin looking at building some more traditionally designed qajait and seeing if something more permanent can be organized, perhaps along the 'qajaq club' idea used in Greenland.

More pictures and information can be seen on the Saputiit site. Hopefully we'll see this project develop into something long lasting for young people in Arctic Québec.

Photos by Saputiit
Posted by Michael at 8:36 PM