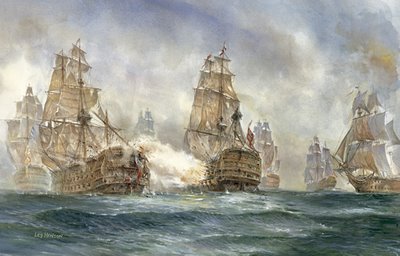 Why not begin the with a victory! Tomorrow, October 21st is the anniversary of the Battle of Trafalgar fought between the English and the combined French and Spanish navies. It's hard today to think about those sea battles and what it must have been like to pound heavy lead into a boat only a few meters away while at the same time they fired away at you.
I was a great fan of Patrick O'Brien's Aubrey books and scoured all the local libraries so I could read his complete series of stories dating back to these wars. I eventually managed to find them all, although I was forced to read them out of sequence. They were wonderful nonetheless and made my last years of teaching so much less onerous. I used to give a lot of in-class reading assignments, sometimes lasting for the whole afternoon! I produced a lot of great readers that way...
I haven't seriously thought of mounting any cannon on my boat yet. The thought of even firing a gun anywhere but straight ahead from a kayak is a bit intimidating. I was interested to learn that guns actually forced some design changes to kayaks in Greenland where the builders sought to increase the boat's stability when aiming and firing. Clever fellows! I suppose their success accounts for the lack of a 'Cannon Roll' in the rolling repetoire at competitions.
I wonder where my old gun is? After all it's nearly hunting season around here and I do have a gun permit... No, maybe not!
Posted by Michael at 8:32 PM

sounds like a marvellous idea, ideal for when the little b's are casting fishing hooks at you on the Clyde , the ones along the canal prefer bricks.