Diversity, the Food of Life 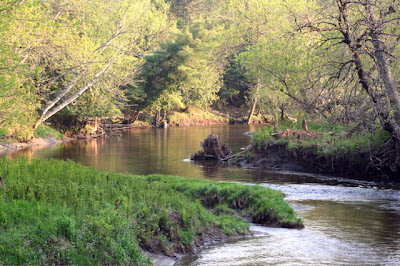 Nice little stream, wouldn't you say? It could be one of the streams that made up the old Indian canoe routes that criss-crossed northern New England and my part of Canada in the old days. Last evening, my wife and I walked our dog along an old rail bed now converted to a biking trail that parallels the stream for a good part of its length. As pretty as it is, it's not really suitable for paddling on. It's full of nasties, some left over from industries now long since closed and today farms pump tons of nutrients into it by refusing to provide buffer areas along its banks. These nutrients were the major cause of the cyano-bacterial outbreak on my lake last summer which prevented whole towns from drinking the water. 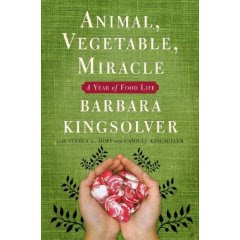 The book cover pictured to the left is by Barbara Kingsolver. It is a wonderful read, but a sad one as well. It describes how we are ruining ourselves, depleating our planet of its diversity and its food sources. Like the stream, it tells the story of our greed and thoughtlessness. At the same time, it holds hope. The stream could be repaired and brought back to its pristine glory, if we want. Kingsolver talks about how her life and that of her family were enriched by searching out 'real' food sources, grown and bought locally, in season, then cooked and eaten for its taste. They discovered that eating food shipped from one side of the planet to the other was ill-advised, unnecessary not to mention, tasteless!


Finally, like this marsh, life can become rich in its diversity. The trend towards mono-culturism, 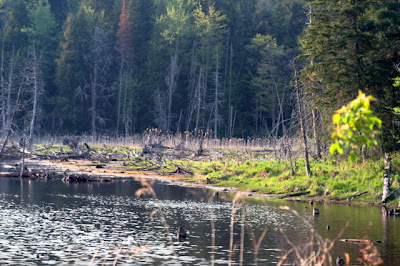 agri-business and long shelf-life vegetables for pill-popping couch potatoes doesn't have to happen. But it will if we do nothing.
Posted by Michael at 12:53 PM

Hello from Kugluktuk! I had read your blog before, so this morning when I read Nunatsiaq news I recognized your name in the letters to the editor. I run the learning centre here for Nunavut Arctic College and am always interested in hearing about stuff like this! However, I will be off all of next year on maternity leave. But I did call another group in town to inform them of your letter. Hopefully they take interest in your offer! I think it sounds wonderful and would participate in an instant!

Well said, Michael. The problem, as we all know is the $ motivator that leads to "efficient" and expedidiant farming methods. Industrial and farm practices have poisined our local rivers, and it is taking for ever to get the feds to cough up the money to dredge and repair

people need to get out and garden, growing some veg, even lettuce in a pot is easy, organinc and 0 food miles.
and we need to stop flying and driving vast distances. . . .

In May, English farmers grow some of the best asparagus in the world. A recent TV news item reported that in supermarkets in the asparagus growing area, the asparagus on sale had all been flown in from Kenya.

While it is good to trade with Kenya, I read an article that said that international farming companies were now using so much water growing crops and flowers for the west, that local people were living in near drought conditions.