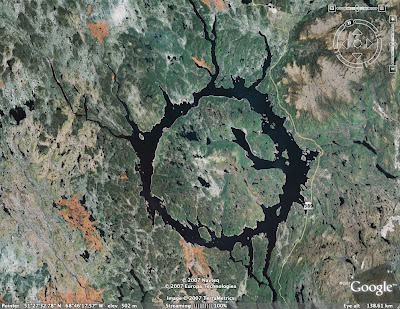 I received news recently that my plan to paddle for several weeks in Georgian Bay, Ontario has run into doubt. While I have not heard from two of the participants, the third has regretfully had to put the trip off for at least a year. The remaining paddlers may still wish to do part of the trip, although neither was committed to it in its entirety, a complete circumnavigation of the bay.

This leaves my August paddling plans up in the air a bit. However, like many people I have a 'little list' of potential paddling trips I'd love to do. I mentioned the Lower North Shore of Quebec a while ago, a trip I'd dearly love to finish one day, given a suitable paddling partner. Here is another trip on my list, the lake formed when the Manic 5 dam was built on the Manicougan River which drops down to Baie Comeau on the St Lawrence River in Quebec. The impoundment lake thus formed has created a circular body of water, the result of an ancient meteorite impact. From what I've heard, the area is a geological wonderland well worth the time it would take to paddle. The distance around is roughly 120 miles or 200 kms making it a great week's outing. This would provide sufficent time to see all the wonders reputed to exist on the shoreline.

sorry to hear about that. I know keeping & finding paddlers for such trips can really be rough. LOL!

Don't tempt me! Give us another year or two, and I'll bring the entire family.

Derrick - don't tell me you have this kind of problem! LOL

Kristen - Hey, lots of caribou moss up there for rash-free diapers! Seize the present! ;-)

That lake looks AMAZING! Can you really do what it looks like you can do - park your car (which of course in my case is a theoretical car), and then paddle 20 miles a day for 6 days to get back to your car?

That is so cool.

Don't think I can make it though. Sorry!