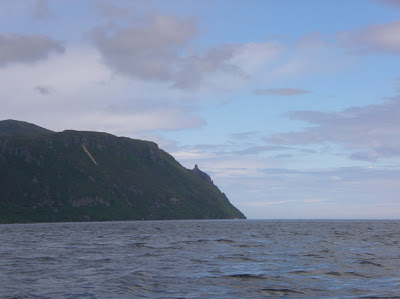 I turned around and headed back to the put-in. The wind was out to get me as I paddled out of Bonne Bay into the Gulf of St Lawrence. I could feel my limits would soon be reached. Waves had been building for a while and now they were beginning to break and roll down on me, something I don't like to be out in alone. Then I turned around again. I had a goal, a promise to keep that I'd made last summer. I could handle the conditions as long as things didn't deteriorate further. I headed out again and soon passing the rocky spire called 'The Pinnacle' in the picture above. One thing my boat likes is to go up-wind if I want to paddle it! 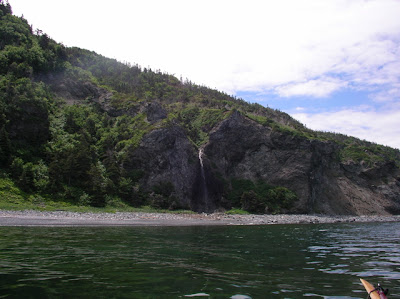 Once passed this point, the wind died away almost completely. I had been slogging through a wind funnel created by the high hills near the mouth of Bonne Bay. I dug in and was soon easily gliding on, knowing I would be able to get to my objective, a narrow falls on South Point. To visit the falls was a paddling promise I'd made the year before from the lighthouse near Rocky Harbour on the north side of the bay. I'd soon be there. 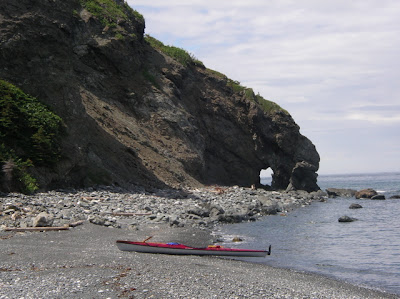 When the falls came in sight, I got a surprise: there was a hole in the rocky wall which formed the south end of the beach at the falls. It wasn't big, more of a window than an arch, but it was something few others had seen as most kayakers visiting Bonne Bay tend to stay within the inner bays. 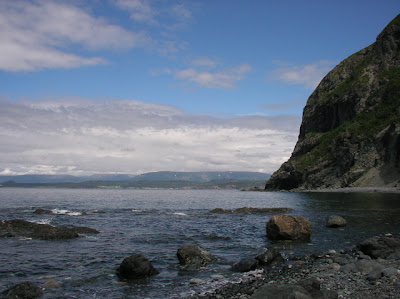 I walked the length of the curved beach and looked back to the lighthouse. I doubt people are able see the falls this year as the present flow rate is considerably reduced. I wondered if a local kayaker I'd met in Rocky Harbour had managed to visit the falls. I'd forgotten to ask when we'd talked the day before. 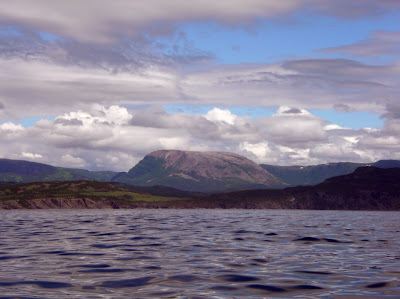 It was a fun and satisfying visit. I like keeping little promises. To celebrate, I collected a small rocky souvenir and headed back to my put-in at Norris Point, using Gros Morne as my beacon.
Posted by Michael at 9:10 AM

This series is beginning to torture me as I feel the lure to repack and get back out. Just awesome stuff, Michael.

Go with your feelings, Dick. Put the torture behind you and get out there...

Had to smile - our family also has a penchant for collecting small rock souvenirs.