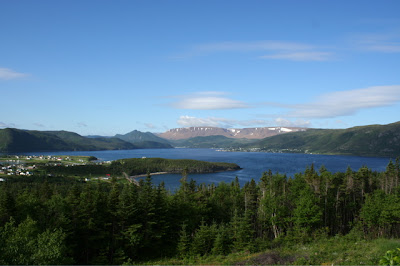 When I visited Newfoundland in 2006, one of the places I knew I wanted to return to and paddle on was Bonne Bay in Gros Morne National Park. This UN World Heritage site has so many attractive qualities about it. For example, in the top picture notice the brown hill in the background. Called 'The Tablelands', it is actually a block of the Earth's mantle which has been thrust from it's usual position under the continents to being exposed on the surface. Little grows on it due to the nature of the rock. I was surprised to see snow still lying here and there on its flanks in July. Hiking its trails is an 'otherworldly' experience to say the least and well worth the effort. 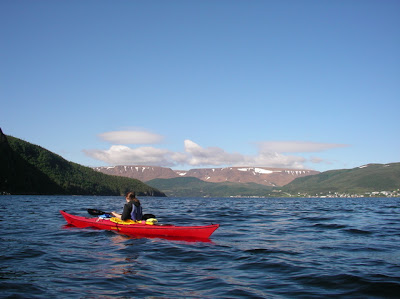 Paddling in Bonne Bay is dominated by the 'Tablelands' on the south or by 'Gros Morne', a bald blob of a mountain on the north side of the bay. The water is protected from the sea winds blowing out on the coast, but can be subject to sudden blasts coming down from the hills, so one needs to be weather-wise. A drowned glacial moraine at the point where the bay divides into two sections, reduces the circulation of sea-water on one arm resulting in it being slightly warmer than the other arm which receives a full complement of chilly Gulf of St Lawrence water with every tide. 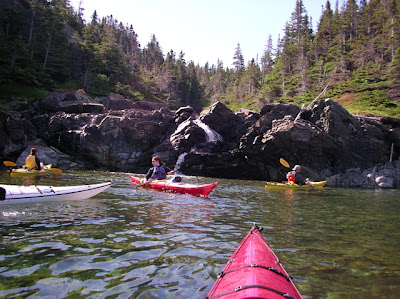 Streams tumble into the bay here and there... 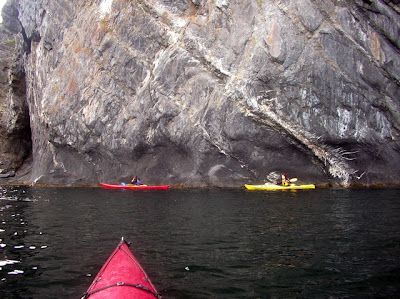 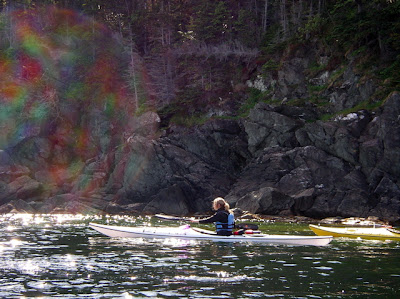 Paddling close to the shore revealed a wealth of sea life including fish, sea urchins, jellyfish and starfish easily seen in the clear waters of the bay.

One cannot paddle for long in Bonne Bay without wondering what it's like on the coast. Tomorrow I'll post about my venture out into the territory usually reserved for the intrepid circumnavigators, the most recent being Hadas and Tomer from Israel, who I understand are only days away from finishing their trip in record time.
Posted by Michael at 9:02 AM

One only sees what one understands. You see so much that I would have missed. Thanks for the teachings.

god pictures, the paddlers really show the size of those cliffs.