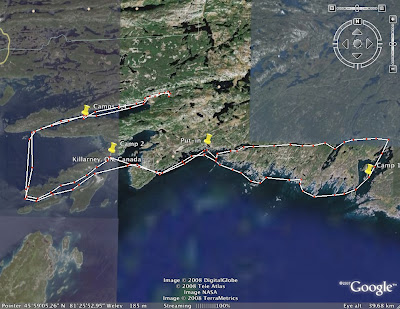 Above is a Google view of my trip route, beginning with an eastward leg up Collin's Inlet to my first camp in Beaverstone Bay. 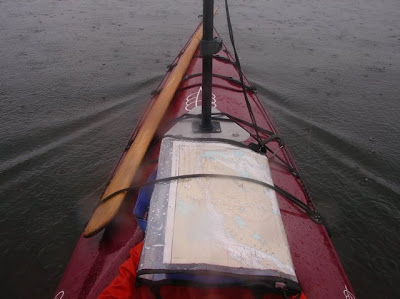 Finding the entrance to Collin's Inlet can be tricky until you make the adjustment between the chart scale and the various features around you. I initially misjudged the scale and headed too far out into Georgian Bay only to become confused trying to locate what I could see around me with the features on the chart. I returned to my last known point, spent a few moments identifying the various islets etc, and then set off in the right direction. 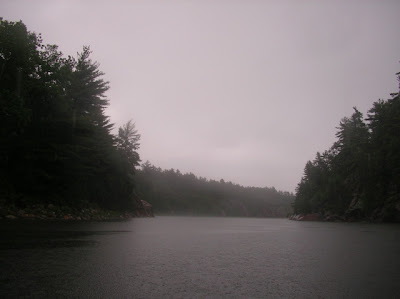 While the day began in sunshine, it slowly turned foul as I paddled further down the narrowing channel in the Inlet. 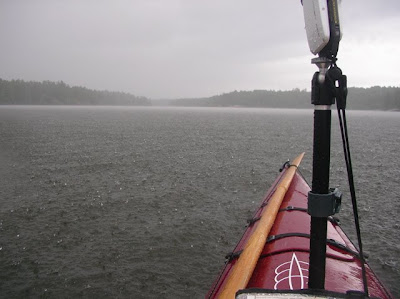 In no time the rain was pelting down... The 'post' on my deck is my Sticky Pod which holds my video camera so I can film hands-free. 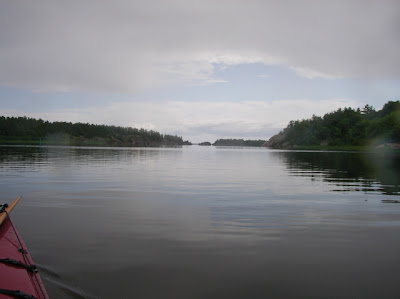 Once I arrived at the eastern end of Philip Edward Island, the rain ended, the skies began to clear and I could see the opening to Georgian Bay ahead of me. 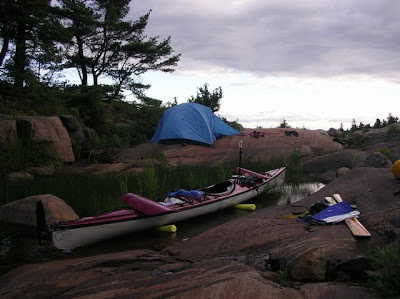 Twenty eight kilometers of interesting paddling brought me to my first campsite of the trip on this little islet in Beaverstone Bay. While the rock looks hard and uncomfortable, in fact, I was quite pleased with the warm, smooth surface and enjoyed my stay in such a beautiful area!

Tomorrow's post will take us westward towards Killarney and Baie Fine.
Posted by Michael at 10:15 AM

It looks like an absolutely marvellous trip. If only I could find some time and an excuse to go paddling in Canada :-)

I'm sure to follow your trip, it does seem amazing.
I was supposed to be on a trip of my own by now but I'll have to wait at least a month to take a vacation

René - I'm sure you can come up with something that will bring you over here! :-)

Rebecca - hopefully the wait will only make your trip better! For example, maybe the bugs will be too tired to fly by then!

Your comment about navigating with a map "...can be tricky until you make the adjustment between the chart scale and the various features around you. I initially misjudged the scale..." was bang on. It took me a while also to get used to the scale.

We enjoyed our first trip to Georgian Bay (Franklin Island) so much that we went back a few weeks later (Mink McCoy Islands). See my blog marccharron.blogspot.com for more details.