Of course everyone knows we live in a new world from now on. The election of Obama as president of the United States sends all sorts of ripples through the universe which could change everything should the Fates decide on that course. 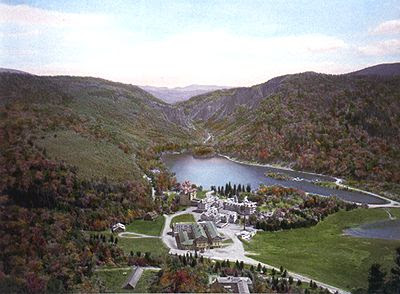 The first poling station to report in was Dixville Notch in New Hampshire. There is a magnificent hotel called 'The Balsams' in the Notch, which can be seen in the picture above. Taking the road past the hotel and along the little lake is always a treat, especially when one reaches the top of the notch itself. Here the road literally takes an edge. At one instant one is going up and suddenly one is headed down. There's no road I know of with quite the same sudden transition. 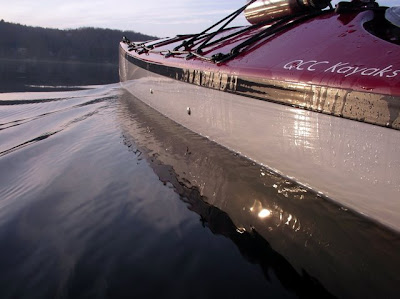 Totally unrelated is the next photo taken during my daily paddle this afternoon. For some reason we've been granted a reprieve from the on-coming winter. Temperatures for the next few days are expected to be in the high teens (°C). Today was warm, sunny and calm on the lake. I practiced my canted forward stroke. It really gets the boat moving compared to my usual cruising stroke. I found I could maintain it for nearly a mile before slipping back into cruising mode. It's times like this I could use a GPS to record the difference in speed through the water. It seems like there is at least a kilometer or more per hour increase with the canted stroke...
Posted by Michael at 7:44 PM

superb waterline photograph! you can get into a rythem with the faster stroke, it really keeps you fit too, I am an expert on this from my shoreside seat........