Is Canada Wearing Its PFD? 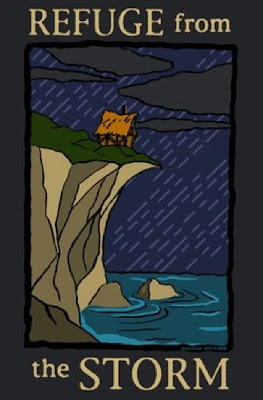 I'm certainly interested in following political affairs as they run in various parts of the world although I tend not to write about them here on ckayaker. After all, this blog is mostly about my love of kayaking, guitars and the arctic. However, the current political fiasco here in Canada is too wild to ignore. It's like paddling through heavy clapotis alongside storm smashed cliffs and not wearing your pfd your helmet or even your sprayskirt. Here we are in the midst of a world-wide financial meltdown and in response, the Harper government leans over and takes a swipe at women, unions and party funding, all the while ignoring the dangers around us.

What's that you say? If you're not following Canadian politics - and why would anyone under normal circumstances? - then here's what going on. The finance minister stands up to deliver the government's position on the financial crisis and how it will respond. Everyone in Canada leans close to the TV. We're up against the wall, he says. Canada nods, cause we surely are. So to protect Canadians in this tough time, he says, we're going to forget about pay equity for women. We're going to stop paying political parties money to finance themselves. And we're going to cap union wages and take away their right to strike. Say that again...? Isn't this about the economy...?

Did we all feel better after hearing this? I guess not! Our jobs are still on the line. Our mortgages are still in peril. Our savings are withering away just as fast. Knowing that women will still get second class pay, unions will not be striking and political parties will be silenced does nothing.

So, like any decent person who screws up and gets caught, Harper needs to do the right thing to make amends. He needs to say Mea culpa and resign. Will he? Not a chance. He will blame everyone and everything for his problems. He could very well mess up a country most of us are very proud of as his star sinks in the west. Why not push him off the cliff and see if he can fly? Naaahhh... It's the economy, silly!

Update! Like the school boy who pulled the fire alarm rather than fail his exam, our brave leader got out of facing certain defeat in the House. Now isn't that something to teach your children... Shame knows no boundaries!

Photo lifted from: www.la.cityzine.com
Posted by Michael at 1:58 PM

I think he read the GW playbook on how to screw up America...

Good thinking! More leaders ought to be paddling, don't you agree?

i'm with you Michael. i had an uneasy feeling when he was first in the running for pm that Harper was a very suave version of our own alberta premier of the time, Ralph Klein.... and i'm thinking now that i was pretty close to the mark. neither has shown much interest in the wishes or wellbeing of the people they claim to represent. it's easiest to do as they please, then pretend they didn't know there was opposition to the idea, after they've got what they want. arrogant with a capital 'A'.

As a member of the Commonwealth, I've been following your mess, particularly as one of my academic colleagues is Canadian and also up in arms. But amazes me that there's nothing in the local (US) press covering this travesty!

True, Kristen, there is little about this in our press, although I did see a small article of note yesterday.

Like yourself, Michael, I choose not to write about politics. I must say, however, that the folks who often choose to stand for office (and the security and power of being a public "servant" often do so for the very reasons that make them unfit for the job. In the end, government is the one thing that produces nothing, and the pols benefit from it???