Our first morning, we woke to clear tropical skies and unlike the previous day, the sea was much more settled with just an easy swell rolling in from the west. Our boats already packed, we launched off the stern platform and headed eastward out of the bay. High, basaltic cliffs topped here and there in dense green growth led the way. Our first objective was a tiny inlet marked on our ancient map, but we were none too confident of being able to find it. Our GPS units, as we expected, were useless. No island appeared at all on our screens. Instead, open water was all there seemed to be in this location.

Paddling in the left over clapotis along the cliff edge, it was impossible to see any bottom. The black smooth rock plunged straight to great depths. After paddling about twenty minutes, the nature of the cliffs changed. Instead of wave worn smooth volcanic rock, we entered a section of columnar towers seemingly glued together. Each multi-sided column again rose from the depths and then each appeared to have been broken off far above our heads. It was in the maze of these columns that we found the tiny inlet marked on the chart. My companion nosed her way in, hands touching either side of the aglae covered rock. I filmed her movements as the swell alternately moved her kayak up and down as she poked it's bow into the small opening. 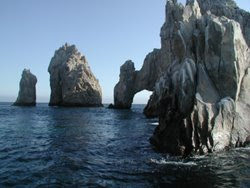 Back on the open water, we continued our eastward heading. Our plan was to discover the cave which led to the interior of the island and to see if the tunnel and stairway was still passable after all this time. As we worked our way around to the eastern coast, the cliffs maintained their jagged heights. No sign of vegetation appeared however, suggesting there was little to support their growth. Up ahead, we got our first glimpse of the islands marked off the most easterly point. They turned out to be rocky, volcanic pipes, spires which stood tall in the sea. We could see the swell, now increased in height, crashing against their bases. It looks like a fun place to play in once our main objective was discovered and explored. 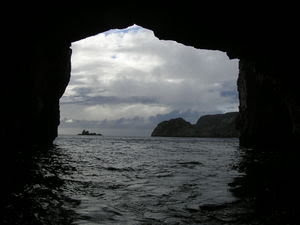 Making our way towards the spires, the opening of the entry cave soon came into sight. It was huge, the largest cave we'd ever seen, easily over 20 meters high and almost as wide. The swell could be seen swirling around its entrance, especially the side nearest us. Standing off beyond the agitated waters at the opening, we debated our best move. It looked like the northern side was our best bet, coming in on the back face of a wave, then surfing it into the center of the cave's entrance. We both paddled into position and waited for a smaller wave to carry us in...
Posted by Michael at 11:24 AM