When I lived among the Inuit, it was impressed upon me that I wasn't to laze about during open water season. Time was short and there was much to be done. The winter would come and only then could I relax. Winter was the time to play games, dance and most especially, to tell stories for everyone's amusement. The stories could be true, half-true or, best of all, spoken dreams of what might have been or perhaps could one day be.

So as the water slowly freezes over here in the planet's northern climes, where people have hauled in their boats and now sit at home with warm drink in their hands and toast their feet by the fire, it is again time to begin telling our stories. Some will think back to trips made during the past year, some will think about trips that nearly happened or might yet happen in the future. I want to go the next step. I want to dream about paddling the impossible; paddling in places that are purely imaginary, real dream worlds! 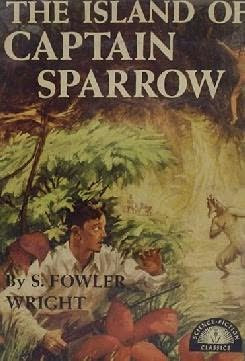 Here's what I mean. Back in 1928, S. Fowler Wright who wrote the book 'The Island of Captain Sparrow' (I'm not sure if this Sparrow was the same film pirate rogue Jack Sparrow or not). I thought it might be interesting to have a look at his island. Would it be a worthy place to visit by kayak? What awaits the adventurer around its coastline? Who lives on the island today and what sort of hospitality might we expect to receive? Is it a worthy challenge for the ice-bound voyager?

Well, let's find out! First, where is the island and how do we get there? According to my information, the island lies in the Pacific, 1500 miles north of the fabled Marquesas Islands and 2000 miles east of the Christmas Islands. With few bays or landing sites and nothing in the way of landing facilities for aircraft, the best plan would be to charter a 'mothership' out of Hawaii for our voyage. Not cheap, but that's the beauty of this expedition: we've unlimited funds at our disposal!

Tomorrow, I'll describe our arrival at the island and we'll begin our exploration...
Posted by Michael at 9:50 AM

This I have to hear.