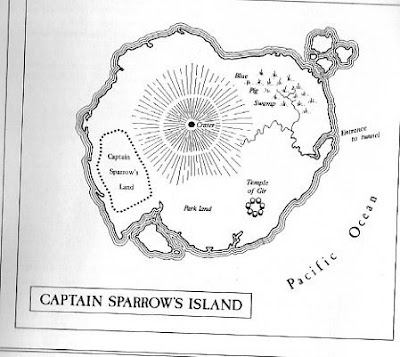 First reported by Capt Geoffrey Cooper in 1744 sailing the brig Good Adventure. The island is roughly 20 miles around with few bays or inlets of any merit. The island is, in fact, a huge volcanic crater with the south side fertile land containing miles of park-like gardens bearing a variety of fruit trees and tropical flowers as well as large birds called ruka which stand over 9 feet tall. Somewhat domesticated, they were said to be tended and groomed by the original native inhabitants of the island. To the north lies a large swampy area inhabited by blue pigs similar to small tapirs. In the old days, three groups of people lived on the island: Sparrow and his fellow pirates on The Fighting Sue, who landed in the 1850's; the original natives most of whom died after contacting Europeans and their diseases and, lastly, a group of satyrs, although this latter group were said to have become somewhat degenerated once the pirates arrived...

Given a coastline comprised mostly of high cliffs and no beaches other than at the lowest tides, our only landing spot will be via the small tunnel shown on the map I've been fortunate to find, on the east coast. To enter, we will require calm seas and a high tide as part way down the tunnel we'll meet a rock face which blocks our entry except at high tide. At the end of the tunnel there were rings placed in the rock wall and some rudimentary steps leading up to a small chamber. This room exits via another tunnel onto the hillside from which we can get our first look at the interior of the island, it's central volcano and so on. To my knowledge, we'll be the first visitors in well over 100 years, so this should be an exciting adventure!

While we explore in our kayaks, our chartered mother-ship will rest at anchor in the shelter of the rocky islet on the south coast. Tomorrow, we'll paddle around to the tunnel entrance and see if we can get on the island!
Posted by Michael at 11:30 AM