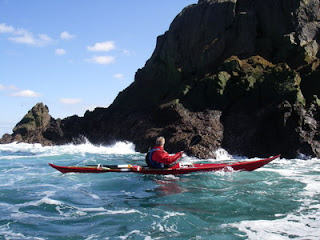 The closer we got to the sea stacks, the more I could see we were in for some fun. The swell coming in from the northeast was long and lazy and about 2 meters in height. I watched as each wave would rush up the weed covered rock faces, creating a valley of swirling water behind it. Eager to get in the midst of it, we headed outward and then dove into the next wave front. Our boats carved lines in towards the stack, but responded to our edges as we surfed up the wave face as it approached the rocks. I was reminded of snow-mobiling giant curves into steep hillsides back when I lived in the far north. The sensation here was much the same but this time there was no trace of our track in the water. There were seemingly endless places to play in the waves and rocks and we took advantage of everyone we could reach.

We must have played for several hours, dodging in and out, using the power of the swell to race our boats in and out of the garden of rocky island chunks. The sun was dropping into the west and it was now time to decided our next step. We had both noticed some sort of discontinuity in the island cliffs to the west and so decided to make for it in hopes of finding a camp site for the night. If nothing presented itself, we'd have to radio the ship to circle round to pick us up.

It was difficult to believe the island could be so completely ringed by hill cliffs in the way it was. Here and there along the face, we could see the rock faces had been worn away creating long overhanging shelves. It was possible in places to paddle under these rocky ceilings for a hundred meters and more before being forced out by the wave action. 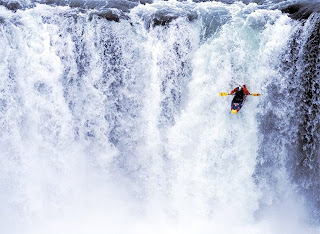 Turning the last headland before the odd discontinuity, we were astonished by what we saw. Nothing prepared us for the view ahead. The thunder of the waterfall was one thing, it's height and water volume was another, but the object coming down it was beyond believe entirely! Looking further along the coast were even more incredible sights...
Posted by Michael at 4:53 PM

Michael, on second thoughts, please make that 2 pints of whatever you are having!

I can't wait till we get round the next corner!
:o)