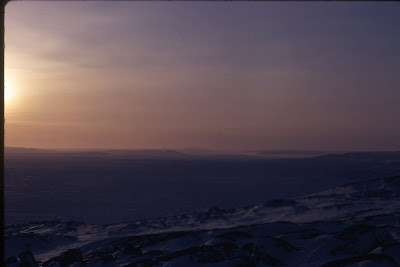 I have recently begun another attack on my boxes of unsorted slides from northern Canada. Last year I had a go at the bunch I took in the Igloolik area of Nunavut. Now I'm scanning another bunch, this time from Nunavik, which is in northern Québec. I was there teaching for four years during the early 1970's and it's an area I'd return to more often if it wasn't cheaper to fly to New Zealand - another truly Canadian bit of humour, I suppose, where the antipodes is closer than your neighbour!

This first picture, taken on the hill behind Kangirsuk about this time of year looks up the river where we would go fishing during the winter. At that time, most people depended on this fishing trip to provide most of our food supply. We would have fish often for all three meals of the day. Good thing I like fish!

In the summer we'd go up river by canoe, but in the winter, it was by skidoo, trailing a long wooden komatik to carry our supplies and on the return trip to bring back the catch of fish. These were caught in gill nets set under the ice and checked every few days. We also caught fish the old way using a fish harpoon called a kukivuk. This device speared the fish and had two clasping prongs which held the fish on until it was withdrawn from the water and secured. In the winter, the fish would freeze in a few minutes.

In the picture, the sun has begun climbing again into the sky after sneaking about the horizon all of December. Unlike Igloolik, in northern Québec the sun wouldn't completely disappear in the winter.
Posted by Michael at 3:08 PM

And what would be wrong with flying to NZ...? I do enjoy the stories of your time there.

I've been considering buying one of those slide/negative scanners myself. I'd love to see more of the photos from back then though. It would be facinating to me. Also, check out http://notobscure.com/ It is a current Kangirsumiut teacher's website.

C'est Moi - my slide scanner is an attachment that came with my Epson 3-in-1 printer and works quite well. I recommend it highly. If you'd like to see anything in particular drop me a note at my hotmail email address (see my profile). I'll see what I have in the box and scan it sooner rather than later if I have it.