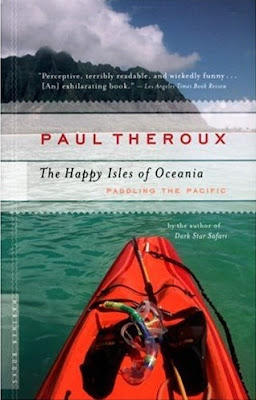 Somewhere along the way my little family of four began telling a story about the short-term memory of a typical goldfish. In the story, the fish lives in a bowl together with a little castle. As the fish swims round and round the bowl, it repetitively discovers the castle and joyously remarks, "Oh! Look, a castle!". Recently, the story has begun to take on a more sinister edge. I'm re-reading Paul Theroux's travel book, The Happy Isles of Oceania after many years and while it's vaguely familiar, most of it, like the little castle, seems to be completely new and fresh to me...

While Theroux carries with him and actually paddles a small folding boat from time to time, the book's real interest for me are his comments about the people he encounters on the various islands. He was hoping to find living chunks of a sea-faring culture scattered through the islands. After all, were these islands not first discovered and settled by people who covered vaste distances in small open canoes and did these people not use the sea to sustain themselves for a 1000 years or more?

Instead, he discovered islands full of people who, for the most part, had turned their backs on the sea. Most were terrified even of taking a ferry to a nearby island and cautioned him not to paddle his kayak beyond the reefs. Even fewer ventured out fishing. So what happened? Theroux has some opinions on the subject, but it made me think about Inuit culture, what it's become and where it's going. I know people who are concerned with language loss and other rapidly disappearing cultural attributes, but I wonder if enough people care enough to rescue what's left. I hope so. Theroux's book has me scared a bit.
Posted by Michael at 8:36 PM

The only Paul Theroux book I've read was Riding the Iron Rooster.

I came away from that with no interest in reading any more of his books. He just seemed to spend an awful lot of his trip feeling superior to pretty much everyone who crossed his path.

Not surprised to hear he gave a similarly misanthropic spin to this book.

I'm a great fan of Theroux's earlier travel books, particularly his train journeys, and this one is sitting in the get-around-to-one-day pile. The book ruffled a few feathers in NZ - apparently he was not too kind to the locals ;) Try Tony Horwitz's "Blue Latitudes" - he has an empathetic ear to Pacific cultures trying to "find their way" in new appreciation of "the past".

You've got good cause to worry Michael. Traditional skills are disappearing fast. For instance, sewing is still practiced but the materials are all manufactured in the south. Every village has one or two dog teams that are recreational or breed for Ivakkak but is that enough to sustain the generations of knowledge and skill developed for dog driving? I don't know one man my age that hunts seal in winter over the breathing holes in the traditional manner. There are a couple of elders still practicing this skill but the guys my age will go get meat at the co-op, or eat fish, or some other less difficult to capture prey. It gets worse, IMHO, when we look at the youth who used to follow elders or parents as they accomplished traditional tasks, because they are too engrossed by the mass media piped up from the south, especially the African-american subculture, to spend any significant time learning these skills of the past. Something is being done to arrest the decline but my sneaking suspicion is that villages are going to have one or two specialist technicians who are the inheritors of traditional skills, in the same way they have a couple mechanics, a couple maintence men, a recreation co-ordinator, etc. But what skills will be lost in this specialization of traditional knowledge remains to be seen. As an example, and you might be better able to comment on this than I, it is exceedingly rare to see anyone wearing a pair of water tight kamiks anymore. Very few women seem to have the knowledge to do it. Those few are further reduced given the amount of time needed to prepare the skins. Many people just don't bother because rubber boots do the job and cost, relatively, so little.

Interesting comments to be sure. I suspect that most people today have only so much time and energy to devote to maintaining their cultural past. Look at all our under-funded museums. There's a reason for the lack of funding: much of what we once held dear no longer has much use in today's context. I own a car, not a horse pulled buggy seen only in the museum in town. Some people still enjoy running a buggy for recreational reasons, but that's it. Why keep alive this old-fashioned way of life when it doesn't suit the times we live in?
On the other what everyone from ourselves to the south sea islanders to the Inuit need to know is how to best use the resources we have at hand within the environment we (and they) live in at the moment. What gives me concern is when Polynesians import canned fish rather than go out fishing. We do the same thing when we import garlic buds from China. I can grow more garlic than I could ever eat in a bucket on the kitchen counter. Why am I importing it? Why do the few Inuit who do paddle, use plastic kayaks when they could use their own cultural attributes to come up with a better boat, built locally and for far less than the cost of an inferior import?
Taking the easy way out means we've stopped trying to solve life's little challenges for ourselves in a way which means something to us. Suddenly we've accepted to let someone else determine who we are, how we live and what we'll become. By becoming just another citizen of the wider world, we give up who we really are and, in my opinion, that loss of identity will ruin us both individually and collectively.