Most people are familiar with kayaking in the summer when water is in its liquid state , but how many of you are familiar with winter's 'solid state' version? Here are a few photos taken this morning which illustrate the main differences and similarities for the un-initiated. Pay close attention and you too will soon be enjoying this new form of paddling! 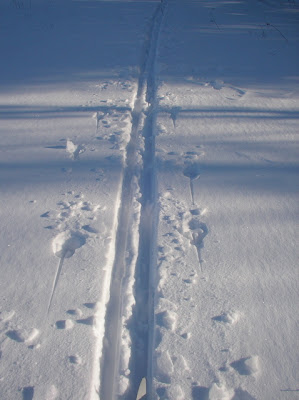 One of the first things to recognize is the wake of a solid-state kayaker. In the photo on the left, you can see the wake of the typical twin hull design as it progresses through solid-state water. On either side of the hull are the paddle swirls which also show the clean entry and exit impressions, the sign of a good paddler. 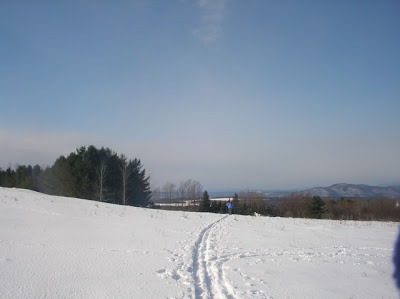 In this next shot, the hull wake is still clearly evident long after the paddler has passed by. Note how this paddler has mastered the difficult standing paddling position, which can be so tricky in the liquid state, yet, in winter, is easily accomplished. Here, the paddler, seen in the distance, has just crested a large solid state swell and is about to surf down its face! Another paddler has just curled off the wave to the right, no doubt to set up for another wave coming in behind the photographer. 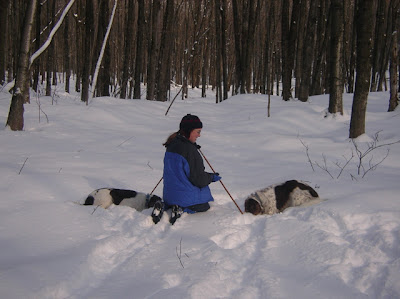 This paddler - my daughter, actually and an solid state excellent paddler - has just recovered from a roll. You can see she has attracted the attention of two solid state water animals which are licking barnacles off her hull and one of her paddles. These animals will play along side one's boat for hours in the wintertime providing the paddler with loads of fun and enjoyment. 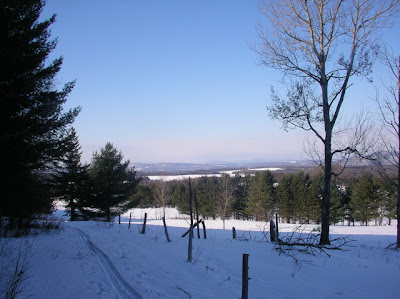 In this final photo, one can see a coastal scene full of typical solid state tree-stacks, and a solid state surf tossed tree-garden (note: a helmet is recommended in these experts only conditions!). This is just one of the many coastal features which make solid-state kayaking so much fun during the winter months.

If you get the chance, get out there for a winter paddle!
Posted by Michael at 4:27 PM

Michael, what an interesting and provocative area of kayaking! Thanks for bringing it to us. I am immediately writing the ACA and the BCU about certification for instructors who are able and willing to teach solid state safety and rescues. You are indeed a visionary.

thats given me a good laugh this morning, thankyou!