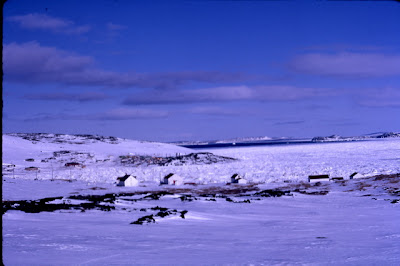 'Here Before Christ' was the saying in the old days when the letters for the Hudson's Bay Company - HBC - were displayed. In a way it was true. The old company of adventurers trading into Hudson's Bay was formed in 1670 and often their traders arrived long before the missionaries. The white buildings with red roofs in the foreground were typical of the HBC trading posts found all over the Canadian north. Most of the buildings were built first to carry out the trade or to house the trader. As time went by, new buildings were built as stores or homes. The old buildings were then converted into warehouses or torn down.

In Kangirsuk, the manager's house is hidden behind the large building on the far left, which had become a warehouse. The store was the next building to the right. The remaining buildings towards the right were all serving as warehouses in the 1970's.

Today, many of these old buildings have disappeared. The old HBC post evolved into the Northern Store and of course, it was in yet another building built in the same area. The spot where I stood to take the photo was empty back then, often visited by arctic hares and ptarmigan. Today it is full of streets and houses! The town has grown a lot since my time when everyone lived across the bay in the background.
Posted by Michael at 2:08 PM

I have been preoccupied by work and family lately. I let reading blogs slide, as a consequence. I just finished catching up your last week. It was great reading and viewing! Knowing Kangirsuk today and seeing the way it was just 30 odd years back is very enlightening. You are one of the few quallunat people I "know" from those years. There is only one quallunat man left working up here from those years and, if the rumours are true, this could be his last year too. Two others from the days of the Federal Day School and Provincial School's retired just this past summer. The stories I have heard from them of the ski planes were definitely enlivened by your photo and addition to the tales. Perhaps oddly, I can relate to what it must have been like to come up here and work back then. I think living in Quaqtaq for four year, experiencing the land with Inuit, and sharing in the ups and downs of the seasons - as opposed to the time clock world of the south - helps me make that connection to the stories of the past. Kuujjuaq is far removed from that world, in so many ways, for the quallunat today. I will always be grateful for the experiences I had in a small community first. Kangirsuk, despite all its social ills today, is still a place where one can make those connections too.