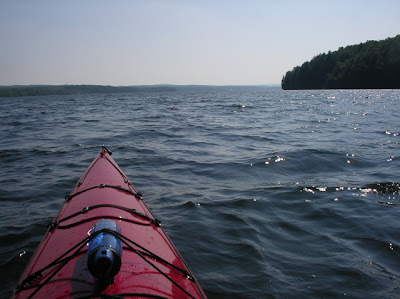 Paddling every day for 100 days as many days as possible back-to-back was a challenge much like being on a expedition-style paddling trip. Time was a big factor. It was really a trip through time as much as it was a journey from one place to another. This was even more true for me as I was paddling for the most part on a small lake and not along an ever-changing coastline. For me, it meant that more than anything it was the seasons that changed and not the headlands. 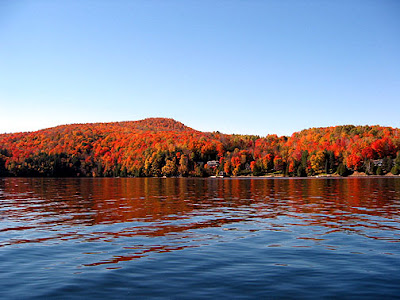 I began on August 28th and paddled for the 100th day on December 27th, 122 days later. The weather varied from 33°C in Delaware to -6°C here on Lake Massawippi. I didn't keep an accurate account of my mileage each day, but my estimated daily distance paddled suggests I had put about 800 kms under the keel at the end. Had I been going from home to Florida, for example, by simply doubling my daily distance paddled to 16 kms a day, I could easily have made it to the sunny south in time for the winter paddling season! Now that's interesting, isn't it... 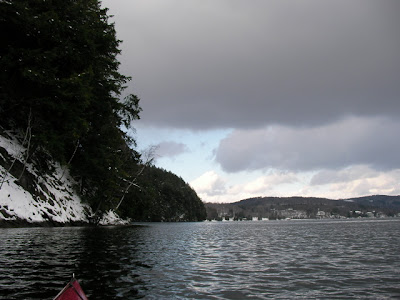 Time entered in another way. As the months went by, the lake changed from warm summer sun to the cold cloudier days of fall (December was completely cloudy and mostly below freezing!). The trees went from green to reds and golds. The leaves then disappeared and the hills became black and brown. Finally, the hills turned white with snow. At first I saw few animals, but as cottages closed for the season, more and more I saw deer and birds of prey. During the migration season, ducks and geese appeared, stayed for a few weeks then moved on. Time changing a place, rather than changing where I paddled.

If you are able to manipulate time in your favour, it's a worthwhile challenge!
Posted by Michael at 12:07 PM

Love the transitional photos, Michael - makes me too feel time slipping by. Not enough of it here at this 'time', and somehow I need to make it to start training for this year's EC, just a few weeks away... But that's the thing with time, make it or lose it.

I love your writing, your pics and your thinking. I believe (we) older folks see doing something as more than just setting a record or putting something new into the log book. It says something about your appreciation for this life and what Mother Nature has provided for us all to enjoy. Others may miss this and see only the distance travelled. Well done.

Michael, I love that red fall foliage. To capture a moment like that you do need to spend time outdoors, taking whatever treat the weather has in store for you. Unfortunately in Scotland, autumn is often accompanied by wind and rain so we do not often get such magnificent displays.

Belated congratulations, Michael - the fulfillment of your quest for the 100 days paddling is quite the feat...led to some very nice blog material, too.
Kinda makes a guy feel a little lazy, tho :->))
We'd hopes of getting out for a quick spin today - a friend's father-in-law got a dandy carbon-fiber paddle for Christmas, and the skipper's just aching to try it out - but 40-gusting-60 northerlies put the boots to that plan.
Skiing's shot, too...had a big warm, rainy spell, and it's cut the base to blazes - lots of bare ground or else ice. Gonna need a good 10-20 cms. to get it fit again...
Oh, The Joys of living in what meteorologists are pleased to term the Avalon Penisnsula's "Temperate Climate"...
Cheer up, spring's coming - six weeks of unrelenting rain, drizzle, fog, brisk onshore winds fresh in over the offshore icefields...does it get any better than that?
Sure does - there's always 'capelin weather' a bit further into the 'summer'...by the time that ends, and the real summer arrives, our climate has pretty well done its job. All but the hardiest of CFAs with a gritty sense of humour have fled the island, gone stark-raving mad, or barricaded themselves behind closed doors and curtains.
Us locals just keep telling ourselves "I love this kind of weather, this is real Newrfoundland weather, I love this kind of weather"... and take our anti-fungals until the weather "lifts".