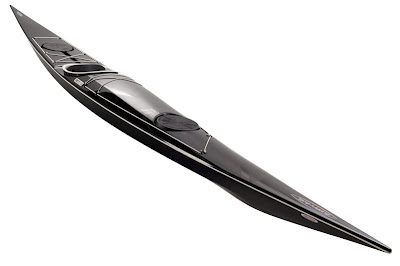 We all know we're not supposed to lust after various items, but, oh my, we do, don't we? Just have a look at this new... aaah... sexy Greenland style kayak from Tahe, a company in Estonia. Here's what they have to say about the kayak...

The Tahe Marine Greenland was born when centuries of established kayak culture met up with the creative capabilities of modern technology. This kayak is a direct descendant of the traditional canoe inspired kayaks of Greenland, ancient boats that reached Central Europe as early as the 17th century. Our modern reincarnation uses the same classic low volume hull with a V-shaped bottom. Although this requires a level of proficiency, at the same time it delivers unmatched speed and performance on both calm waters and in the face of breaking waves. The Greenland’s cockpit space for your feet was carefully engineered, keeping in mind the characteristics and needs of the human body on long journeys. On trips that last several days the true wonders of this tradition inspired kayak clearly manifest themselves – speed, lightness and one very relaxed paddler.

The profile image clearly shows off the skeg and the low volume features of the boat. I haven't contacted them, but if you can't keep yourself from that 'look, don't touch' part of lusting for stuff, then here in North America, Camilluskayak in New York might be able to satisfy your urges...
Posted by Michael at 10:16 AM

There's a bit of a conversation over at: http://www.thomassondesign.com/post/provtur_med_tahe_greenland.aspx#comments about this kayak.

I have a Tahe and it seems to be solidly built and was a great buy.

...and so do I. In real world the Tahe greenland even looks better!
There is nothing wrong with a bit of lust - and in these days of dark economic perspectives investing in durable consumer goods is a good act...

The Tahe greenland in action
http://www.youtube.com/watch?v=iCyu3Rj9MH8

A bit late, but the link doesn't for the NY paddle store doesn't work. It looks like it should be:
http://www.camilluskayak.com

I have to try this kayak!