After following the floe edge for a while without success, we decided to head out to the floating ice pack we could see several miles offshore. This area was also rich in marine mammals of various kinds, including ring seals, bearded seals and sometimes when the wind was coming from the right direction, walrus. 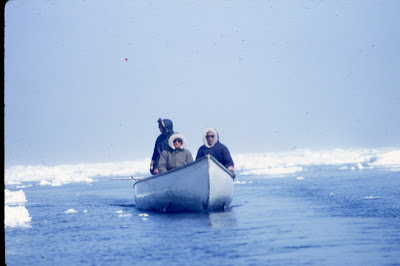 Motoring through the pans of ice was not as easy as one might expect at first glance. The pans were in constant motion due to the currents and often butted up against each other, sometimes quite suddenly. We would also be cut off in dead end leads forcing us to scramble quickly to drag the heavy canoe up on the ice to avoid getting squeezed and sunk. After a few weeks of this routine, I became much more fit than I've ever been before! 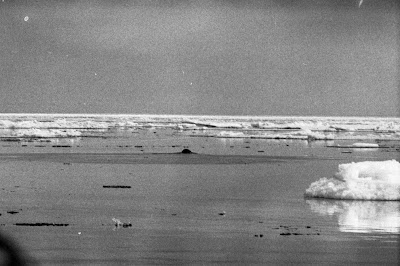 Seals would be seen here and there both lying on the ice pans and also swimming about in the water. As the number of hunters working out of Igloolik had increased around this time because of the move away from camp life and into the community, seals had become much more scarce close to Igoolik and those that remain were fast becoming more wary of boats and guns for good reason. 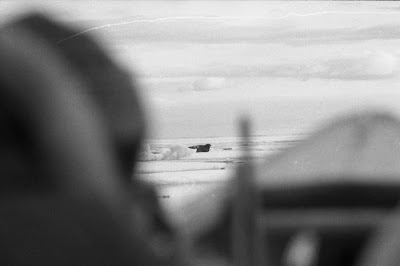 Still we were lucky to spot a bearded seal lying on the ice and slowly made our approach, hunter in the bow and another man running the motor in the rear. The seal would seem to doze with its head down and then look up and around for any danger. The trick for the those of us in the canoe was to remain still during these checks and to make our approach during the seal's dozing periods. 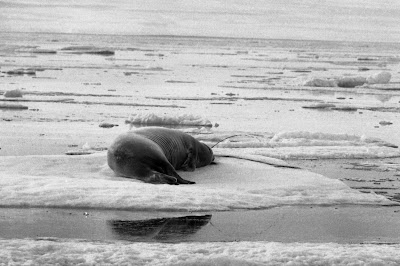 Much of the time, no matter how careful we were, the seal would get spooked and jump into the water where it would be chased if possible, but often thick ice made that impossible. 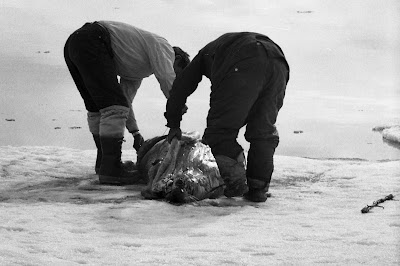 This time we got a shot away and claimed our seal. The next step was to land on the ice pan and cut the 200 lb animal into pieces we could lift into the boat to bring home. Both people and dogs benefited from the hunt, nothing was left behind. If there was sufficient meat at home, we would often bury the carcass in a cache on nearby land to be retrieved the following winter. 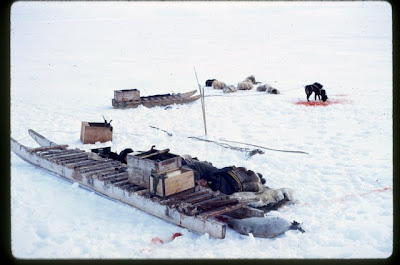 Usually hunting would be a two or three day affair away from our homes in Igloolik. It was a time of both serious work to hunt for food for families and dogs, but it was also a time of considerable fun and good humour, a time when people bonded closely together for mutual aid and safety. As the picture above indicates, we also set aside some time to sleep as well. Tents were usually not used, instead we just crashed out, fully clothed, on a few winter caribou skins! 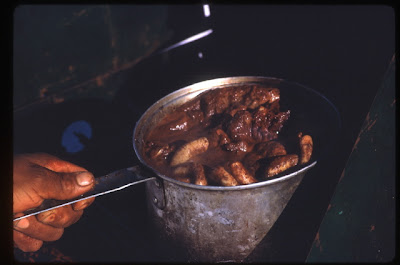 One made a point of not taking much in the way of food when we left the village. It was expected that other than some tea fixings and bannock, a form of bread, we would have to catch our dinner. After all, we were hunting! Happily, the Igloolik hinterland was well supplied with food items. It was up to us to have the skills and patience required to find it and harvest it successfully. In the picture above, a yummy stew is boiling on the Coleman stove, and yes, those are some chewy intestine chunks in there. Waste not, want not!
Posted by Michael at 11:14 AM

I enjoy going to the college of Michael. How easy it is (for me) to forget that my ay of life is just but one amongst so many. How fascinating to learn from you.

LOL Silbs! I'll see what I have in the way of Diploma software to print out some certificates for those who pass the final exams... Failing that, I'm always happy to share.

Love this pair of posts Michael. My favourite seal hunts are the spring ones, where everyone hunts in a group, each manning an aglu. I was supposed to do a lot more of that when I retired... the best laid plans..