Joy For the Holidays! 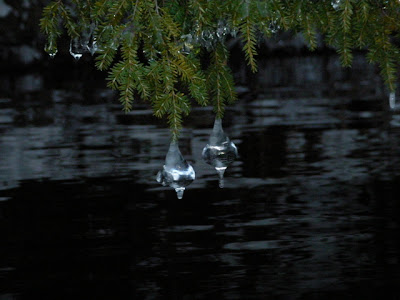 As I did last year, I will take my leave of you for the holidays. I hope you will be spending the time, as I will, wrapped in family activities and fun. Enjoy! Family is all any of us really has especially if you've suffered ill luck or meager times. I'll return in January. In departing, I'll keep my tradition of relating a story. This one is French Canadian, but has roots that go back to First Nation people who also told of flying canoes and magical happenings. Enjoy!

The Magic Canoe
Joe 'La Bosse' the old cook was a hunchback. The gang of rough looking men sat on their bunk-beds, which surrounded the central cook-stove, as he worked his way from pot to pot, stirring a little here, sampling a little there. Outside the snow was piled half way up the walls of the log cabin. Now and then a tree would snap in the cold like a rifle shot and the hungry wolves would howl with fear. It was New Year's Eve, and the lumberjacks waited for Joe to give the signal that their midnight 'lunch' was ready. It had been a long winter. The men, far from home and their loved ones, eyed the keg of rum on the table, a gift from the foreman. It would help them forget their loneliness for a while. After all, it would be spring time before they saw their families once again.

While they waited one of the older men began talking quietly. "Hey Joe, why don't they have 'Witch Canoes' like the old days? We could all be home tonight if we had one of those..." A few of the younger men laughed. Here come the stories, they thought to themselves. Joe was famous for his telling of them.

"Don't you laugh! Those old stories are often true. We could have one, but the costs are too great." said Joe, looking very serious. The men began looking around at each other. Most knew the stories of the old witch canoes which could travel through the night sky, but most knew as well they were old stories with little truth to them, stories the French had learned from the Indians years ago. Their origins had long been lost in the past.

"Those are just stories, Joe. No one believes them these days..."

"Let me tell you my story then," began Joe. Here's what he told them.

"When I was 19, working in this very camp, we took a witch canoe. It was the new foreman's idea. We'd all go home on New Year's Eve and see our girl-friends. We were ready to sell our souls to the devil that night. That's how anxious we were to see our girls again.

"Dazed by rum, I was to be the 8th member of the canoe. You always needed an even number or it wouldn't fly. We went outside into the cold night air, a night just like this one, got our paddles and took our places in the camp's biggest canoe. Baptiste, an older man, was steersman. The foreman warned us we'd be taking an oath to the devil. He was very serious. None of us was to drink or swear or speak the name of God. We were to avoid getting close to any church steeples as well. Understanding the oath, we all swore it and suddenly we felt the canoe jolt into the air. We were on our way. We paddled like madmen. 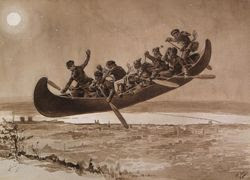 "We rose into the air above the Gatineau River and Baptiste turned the canoe east towards Montreal. Our homes lay in a small village down river from Sorel and in about two hours we could see it in the distance. We couldn't believe our good luck that night. Baptiste brought the canoe down in a field belonging to his uncle, not far from the village. Walking up the only street, we soon heard the sounds of fiddles, laughter and stomping feet coming from the home of Batissette Auge. Baptiste warned us again of our oath, not to drink or swear, and to take our leave promptly when he gave the signal. We walked up the steps and entered the house.

"Of course we were recognized right away and questions of surprise rang out from around the room. My girl Lise was dancing with a guy named Boisjoli, but I managed to get between them and, to the risk of my eternal soul, we danced together for nearly 2 hours, laughing and carrying on like I'd never left for the winter camp. To my surprise, our foreman began passing a bottle of rhum around. He even offered me a drink! I couldn't understand what he was doing.

"Then, just as suddenly, he whispered to me it was time to go. We were not to argue, just leave immediately, all together, as we had come. So reluctantly, we slipped away silently, like Indians, not even thanking our hosts. We got to the canoe and as quietly, paddled up into the night sky. We soon discovered that Baptiste was very drunk. The canoe zigged and zagged all over the place, swooping up and down, nearly spilling us out several times. Once or twice we nearly collided with church steeples, one of them a temperance cross especially put up for the season. I was sick with worry, remembering the terrible oath I'd taken before we'd set out. I knew we were all going to the Devil that night...

"Just as we were coming down to land in our lumber camp, Baptiste's luck finally ran out and we hit the top of a large pine tree. The canoe rolled and tipped us all out. I heard Baptiste swear like a demon as he fell into the pine branches. We all fell down through the branches, finally landing in a snowbank at the bottom.

"The next day, no one but me remembered the trip. I never saw the foreman again either. He simply vanished. Lise, my girlfriend married that Boisjoli boy later that winter and always turned away from me when we met. I was a boor, she'd tell me. Baptiste was lost in the log run that spring. His body never found. The injury I got that night wrecked my back. I could never cut trees again. That's why I'm a lowly cook today."

Joe 'La Bosse' turned back to the stove, opened a lid and began spooning out long ribbons of maple taffy, a twinkle in his eye. The men knew the meal they'd been waiting for was finally ready.

No paddling for me this Christmas, Michael - sounds safer ;) Have a super Christmas and catch up with you in the new year.

wow that top picture is great.

A wonderful tale, and beautifully told. Nothing like a true story to stimulate the mind.