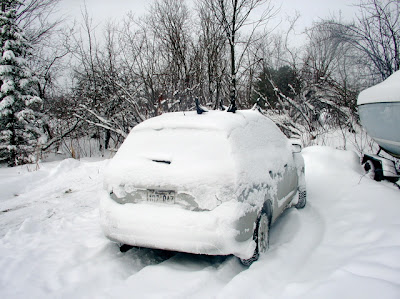 Storm paddling is a bit different from the usual stuff, so here are a few things to keep in mind when heading out. First, it really pays big dividends to clear the snow off your vehicle, especially around the windows. Not only will you be able to see out making the put-in easy to locate, but people in the area will know it's YOU who is heading out paddling, not some flunky up the street. 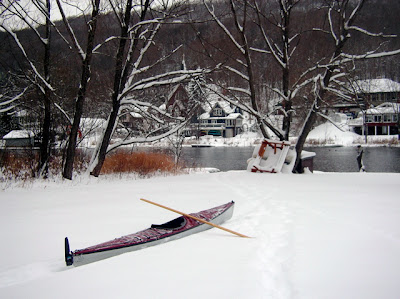 Once at the put-in, there's no need to lug your heavy boat to the water's edge. Instead, turn it magically into a sled with a simple tap of your Greenland paddle, then begin filling it up with all your gear, food, you know, whatever and then off you go. The lucky ones can even suit up at the car, climb in and push off down hill and into the lake. My put-in is nearly level, so I pull my sled-kayak. Perhaps in my next incarnation I'll get a hill-side put-in. 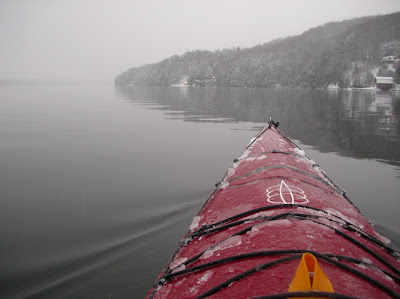 Once on the water proper, paddle to your heart's content, but be watchful for ice build-up. The stuff you see here on the deck is nothing. The stuff to watch is growing out of sight on your hull, just above the water-line. In no time - if it's cold enough - you'll grow ice-sponsons, which unlike the foam kind, do not prevent you from rolling, but actually encourage it, especially the first 180° of the roll. When you've had enough fun, read this backwards to return home where a nice hot drink might be waiting for you!

Me again, Michael. Is that a trailer sailer in the top photo?

I love it Michael. If you get yourself some heavy duty deicing sprays you might get a few more days paddling out of the year.

And you've never mentioned her before!

yeah, about the same conditions here at the moment too.