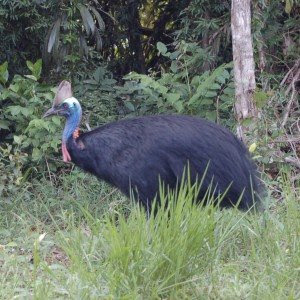 Our hosts could not have been kinder to us. We were wined and dined and taken all over the island to visit the sights. Sadly the satyrs had long since died out, but the huge nine foot tall ruka birds still lived in the southern parklands where they tended the trees. The blue pigs in the swamps provided the monthly ceremonial meals now the satyrs were gone, which pleased me just as well. Somehow, eating mythological beasts was a bit beyond the pale...

I was anxious to visit the ancient Temple of Gir. I wanted to see the mirror that foretold the future. Alas, the temple was a ruin, nearly impossible to get to let alone enter. 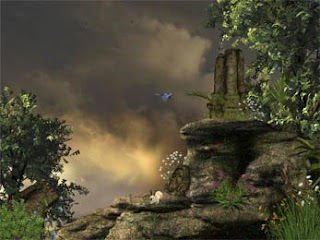 After a day spent hacking a path up to its red rock walls, the best we could do was peer into one of the remaining hallways. The roof over the mirror hall had collapsed and lay buried under tons of rubble. Many of the remaining walls, now mostly returned to the jungle, seemed ready to come down as well.

Captain Sparrow's enclosure had also returned to nature, although a few people maintained hunting camps in the area for old times sake and rough roads made it somewhat accessible on four wheeled ATV's. The original pirate settlers had all been killed by the giant ruka birds, something that began at the end of Wright's book. Today's human population had grown from a number of castaways like those whose story is told in his book. How they managed to build such an incredible city would be a book in itself and can only be imagined...

Our kayak decks, loaded with fresh fruit and gifts, we launched and waving our goodbye's, we headed westward to complete our circumnavigation. After all we had seen and done, it was difficult to match the experiences we'd already had. However one further adventure was discovered: a narrow slit leading into the cliffs on the west coast. 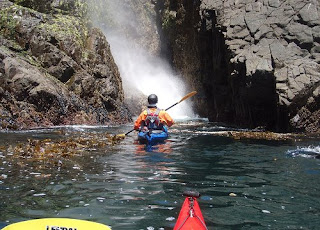 It was a giant blow-hole, perfect for nosing our boats in where we'd lie in wait for the swell to blow. At that point we'd get to ride the wave back out, surfing down it's face back to sea at great speed, as the cliffs raced by in a spray filled blurr. It was so much fun, we entered the cleft again and again in spite of the fact that we were frequently rolled by the surging waters of the incoming swell we met on the ride back out.

Fortunately the seas remained favourable for paddling the remainder of the way around Sparrow's Island and we were soon back with our waiting friends on board the mothership. Naturally they were in awe of our stories and, after giving us a few good pokes in the ribs, suggested we best be off homeward before we came up with any other wild stories. Our attempts to prove the places we'd seen actually existed, proved fruitless, our decks having been swept clean in our exuberance at the blow-hole didn't help either...

¡ HAPPY HOLIDAYS !
And so ends our make-believe circumnavigation of Swallow's Island, an imaginary place first described by S. Fowler Wright in 1928. Thanks to all who unknowingly contributed photos to the story. Those places actually do exist and someday perhaps you'll get out to paddle them. Perhaps some of you already have. Or maybe, like me, you are still dreaming about getting out there!