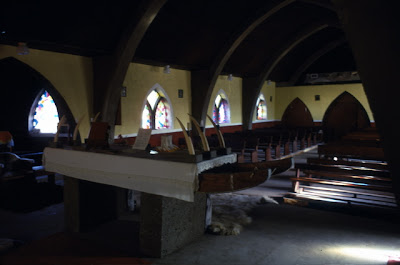 I don't pretend to be a religious person, but I recognize that religious beliefs can serve now and then to produce beautiful things from people. Years ago a priest named Father Fournier lived in Igloolik. Originally from France or Belgium - I don't recall exactly which - he joined the Oblate Fathers and was assigned to be a missionary to the Iglulingmiut.

When he first arrived most people lived in small hunting camps, but during his stay tremendous changes began, the most significant of which was the migration to the new village of Igloolik. With a growing congregation, Father Fournier felt the need for a proper church and he set about building one. Constructed of local stone and cement, he and a group of volunteers built the building seen in the picture above.

The church was full of Inuit expressions of Christianity, everything from the altar to the windows depicted Inuit versions of the well known stories and rituals. When I was last in Igloolik about ten years ago, the old church was abandoned. It had always been impossible to heat and the changing permafrost beneath it was producing dangerous cracks in the supporting arches. I remember first entering the building and discovering a quiet place of stunning beauty where the old and familiar things of two vastly different cultures had come together to produce something new and quite wonderful. It seemed to be a place of hope and imagination, something we all need as we move into a new year where the horizon can look grey and ominous. So no matter what motivates you or what your beliefs, let's all think about new and better vistas as we paddle our way into the future.
Posted by Michael at 11:37 AM

Very well said!! A splendid idea too. That church is amazingly cultured in the Inuit spirit, what an achievement I do hope they maintained their own beliefs.

I don't know Michael, what was the point of trying to bring Christ to a people whose every waking thought was directed at survival in this life as opposed to passage into the next, if there is such a thing. But I'm sure the good priest was well intentioned.

It is always interesting when contemplating spirituality, traditions and formal religions. Each offers something for the soul, but not all of them are for us all. A lovely post.